Stamps to be issued to mark centenary of key historical events

Gallipoli, Lusitania and Pearse’s speech among anniversaries chosen from 1915 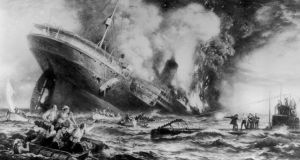 The sinking of the Cunard ocean liner ‘Lusitania’ by a German submarine off the Old Head of Kinsale will be commemerated in a new stamp to be issued next year. Photograph: Getty

Stamps to mark key events of a century ago including the landing of Irish troops at Gallipoli, the sinking of the Lusitania and Pearse’s speech at the grave of O’Donovan Rossa are among 16 new ones to be issued next year.

The Government on Tuesday approved the issuing of 16 new stamps in the coming year with many of them commemorating significant anniversaries.

Two stamps will be issued to commemorate the Irish soldiers in the British Army who landed at Gallipoli in 1915. Around 4,000 of them died in the course of the campaign.

Two stamps will also be issued to mark the centenary of the sinking of the RMS Lusitania, which was sunk by a German U boat off the coast of Cork in May 1915 with the loss of almost 2,000 lives.

One stamp will be issued to mark the 50th anniversary of Taoiseach Sean Lemass’ meeting with the Northern Ireland premier Terence O’Neill in 1965.

Four stamps will be issued in honour of the designer Eileen Gray while Animation Ireland will also have four and the Science Gallery one.

Minister for Communications Alex White sought the approval of his cabinet colleagues for the addition of an extra stamp to the list. It was to mark the 150th anniversary of the birth of the Nobel prize winning poet, William Butler Yeats.