After weeks of hype, Noonan and Howlin deliver a dismal anti-climax 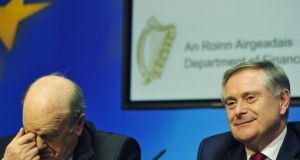 The Government has hit on an amazing new strategy for winning the election. Step one is to build up expectations for months about a mega new announcement. Step two is to give it a catchy name – the spring economic statement. Step three is to clear the decks of Dáil business for a whole week.

And step four is to introduce the element of surprise by delivering long, vacuous and mind-numbingly boring speeches that will bore the long-suffering electorate into abject submission.

To describe yesterday’s spring economic statement as an anti-climax is like saying the Sex Pistols were cabaret crooners.

In terms of excitement, it wasn’t championship hurling, it wasn’t even national league, it was the Nicky Rackard Cup.

The Government’s double act, Michael Noonan and Brendan Howlin, spent 57 minutes explaining at extraordinary length what they could have explained in two minutes.

What did we learn? The amount of wriggle room the Government will have in the October budget will be around €1.5 billion. It will be evenly split between tax cuts and increased spending. Public service pay is back on the table. Oh, and the unspoken bit, sneaked into page 15 of one of the supporting documents – the Stability Programme Update. Irish Water is being placed on the Government balance sheet. Provisionally and for the moment, of course. At least until Eurostat decides in the autumn if the utility stands on its own two feet.

It was tedious stuff. Of the two, Noonan is usually more Morecambe to Howlin’s Wise. But the days when Fine Gael’s finance spokesman used to electrify the Dáil with witty banter are long gone.

Let’s review the exciting phrases that were shared with us – “fiscal space”; a positive “data flow”; and a knowledge development box.

Howlin is usually the main culprit when it comes to jargon but this time his contribution was livelier than Noonan’s, who essentially deadpanned material that was dull to start with.

So enraptured was Independent TD Finian McGrath that he was moved to tweet halfway through Noonan’s speech: “Congrats again to Patrick Donoghue on winning the ‘Voice’. Brillo!”

Brillo indeed. What we ultimately got was two ardfheis speeches masquerading as some kind of a quasi-budget.

Of course, this was political. In fairness, the clunky phrase “fiscal space” for once means something. It is the Government telling the Opposition: “Here is the amount of wriggle room we have – € 1.5 billion for 2016. We have decided it’s going to be split between tax cuts and spending and will give you all the details at budget time. In the meantime, let the other parties show their hand.”

It’s a game of political poker. You get the Opposition to accept the limits and then call their bluff. But, as the responding speeches by Fianna Fáíl, Sinn Féin and the technical group quickly showed, none seemed willing to be drawn into that game.

The Government was “over-promising and under delivering” harrumphed Fianna Fáil’s Michael McGrath, who portrayed it as a “PR exercise” without a single element of detail.

All the time, there were mutterings from the Government benches. Mary Mitchell O’Connor berated his “crocodile tears” and reminded him of who “bankrupted the country”.

So what was it it all?