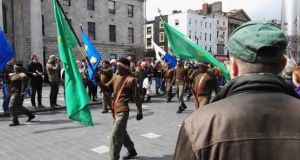 A paramilitary colour party marches past the GPO as part of the Republican Sinn Féin parade to mark the 1916 Rising.

The Real IRA emerged after an IRA “general army convention” in late 1997 and a failed attempt to overthrow the Adams-McGuinness leadership in a row over their peace strategy. The following year, dissidents were behind a series of bomb attacks before and after the Belfast Agreement, including the Omagh bomb in August 1998.

The organisation declared a ceasefire the following month but re-emerged in 2000. Between June 2000 and November 2001, it was behind several attacks in Britain, including a bomb outside the BBC and a rocket attack on MI6 headquarters. The group no longer exists as the Real IRA.

Óglaigh na hÉireann is considered a splinter of the Real IRA. In an interview in November 2010, one of its leaders said: “The Provisional IRA took approximately 15 years to wind down. There is no ready-made IRA pack that can be assembled in a short period of time. An [Óglaigh na hÉireann] capable of having a sustained campaign will take time to develop.”

Since then, several suspected leaders of the organisation have been arrested and numerous planned attacks interrupted or abandoned.

New IRA declared its existence in a statement in July 2012. It is an amalgamation of unaffiliated dissidents as well as the Real IRA and another group calling itself Republican Action Against Drugs. This coalition of dissidents is now seen as posing the major threat. The group killed prison officers David Black and Adrian Ismay in shooting and bomb attacks in 2012 and 2016.