Speakers blaze a trail of optimism at Countess Markievicz School 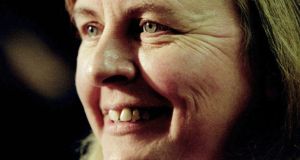 Bernadette McAliskey: gave delegates a highly personal account of her childhood and the road that took her to the moment in 1972 when, in the aftermath of Bloody Sunday, she crossed the floor of the British House of Commons and slapped the British home secretary Reginald Maudling across the face. Photograph: Reuters

“I stand here as the youngest woman in Parliament, in the same tradition as the first woman ever to be elected to this Parliament, Constance Markievicz, who was elected on behalf of the Irish people.”

Bernadette McAliskey drew the obvious links in her maiden speech to the British House of Commons on April 22nd, 1969. Today at the fourth Countess Markievicz conference at Liberty, Hall, Dublin, the circle was completed as McAliskey gave delegates a highly personal account of her childhood and the road that took her to the moment in 1972 when, in the aftermath of Bloody Sunday, she crossed the floor of the British House of Commons and slapped the British Home Secretary Reginald Maudling across the face.

“People always ask me about that,” she said. McAliskey’s speech to the conference had concentrated on her early life, but a question about that moment was inevitable.

“It strikes a chord with people, but not within my own life. My own personal recall is that I actually screwed it up,” said McAliskey. “If I had thought about it more, I’d have done things better. I hit him in a symbolic blow. Now I think about it, I should have grabbed him by the tie and twisted it so he knew what it was like to be afraid.”

“I knew the day I hit him that he had lied and the House of Commons conspired to cover that lie by stopping me talking.”

History may have proved McAliskey right, but she paid a high personal price, she told delegates. “From being the youngest woman in Westminster, I was blacklisted and couldn’t work until I got a job in 1998.”

As the counts from the local elections started to come in on delegates’ mobiles, McAliskey pointed to the inequities facing women in politics, then and now. McAliskey asked if “we see Markievicz as such an important figure, how come she got left off the Proclamation? I can imagine Connolly saying: ‘Shit, we left her off again.‘”

Markievicz and McAliskey. The first woman to hold a seat in the British House of Commons and the youngest woman to win a seat in that house. Mná na hÉireann. Women who, McAliskey told delegates, “dug where they stood”.

Meanwhile women local election candidates out in the count centres were hoping that something was growing in the holes they had dug.

What the conference went on to discuss, violence against women and the challenges facing young women would not engender much optimism, especially as the day had kicked off in anger. Organiser Niamh Murray had welcomed attendees “in the year that in a city of 1.2 million people, they couldn’t find a single woman to talk at the opening of the Rosie Hackett bridge.”

It was left to the speakers to blaze a trail of optimism. And they did.

Quote of the day went to young Traveller activist Eileen Flynn, who told the Markievicz School: “A lot of people think women are treated equally. We’re not. We’re treated equally, but cheaper.”

Joining McAliskey for a retrospective was feminist activist Ailbhe Smyth, who told the school that there was a long way to go in the struggle for gender equality and that she was prepared to go “kicking and screaming”.

“It ain’t over until all the feminists sing together,” she told delegates.

With two One Direction concerts at Croke Park still to go, that might just happen. It’s what makes us beautiful.