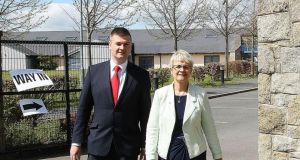 The SDLP’s Margaret Ritchie said the party strengthened its position in the constituency. Photograph: Bill Smyth/PA

The SDLP’s Margaret Ritchie retained her South Down seat, as the DUP’s Jim Wells controversy-strewn campaign ended in fourth place behind the Ulster Unionists.

The DUP and former Northern Ireland health minister Jim Wells cut a forlorn figure as he saw his vote decline for the second election in a row.

During the campaign Mr Wells caused uproar when he said children of same-sex couples were more likely to be victims of abuse. He resigned as health minister after he made the comments.

While Ms Ritchie was expected to keep her seat in the House of Commons, Sinn Féin’s Chris Hazzard was predicted to cut into her vote. However, a Sinn Féin surge did not materialise.

The constituency has been a SDLP stronghold since Eddie McGrady took the seat in 1987 from the Ulster Unionist Party.

Ms Ritchie said the party strengthened its position in the constituency.

“We have a solid majority now in South Down without any votes being lent to us so let’s lose that myth now.”

Ms Ritchie added she will continue to call for a cut in VAT for the Northern Ireland tourism industry, as is the case in the Republic of Ireland.

“In this new parliament I will again be leading the campaign for the reduction of VAT on tourism because I believe the tourism industry to grow the local economy. South Down is a tourist district but also it is the catalyst for our economic development, growth and job creation.

Mr Wells said after the results: “This has been an eventful election for me personally. I’m pleased the DUP proportion of the vote has held firm, in very difficult circumstances, and I’m pleased the overall unionist vote has increased.”