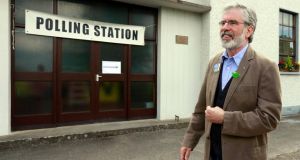 Sinn Féin president Gerry Adams leaves the polling station after casting his vote in the European parliament elections at Dulargy national school, near the the town of Dundalk, yesterday. Photograph: Cathal McNaughton/Reuters 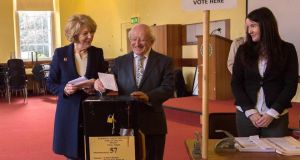 A solid turnout of close to 58 per cent in the local and European elections is being predicted by the political parties.

Both Fine Gael and Fianna Fail sources forecast tonight the turnout would be close to the 58 per cent figure achieved in the last local and European contest in 2009.

A Fine Gael spokesman said the figure might be even higher, while a Fianna Fáil source said it would probably come in just under that figure.

Polling stations opened at 7am for the European, local and byelections.

They closed at 10pm.

More than 2,000 candidates are contesting 949 local authority seats while

41 are chasing 11 MEP seats in the three European constituencies in the Republic. Byelections are being held in Longford-Westmeath and Dublin West.

The counting of votes will begin tomorrow morning with the first results in the local elections in the afternoon. Results in the Dublin West and Longford Westmeath byelections are also expected in late afternoon.

Counting in the European elections will not begin until Sunday but tallies should be available tomorrow.

Am I eligible to vote?

You must be over 18 years of age and you must live in the local electoral area. You must be registered on the Register of Electors compiled every year by county and city councils. You may not vote in both a county council and a city council election.

What do I need with me to vote?

How many ballot papers can I expect to receive?

In the constituencies where the by-elections are taking place, voters may receive up to three ballot papers depending on their eligibility to vote in the respective elections.

Can I take a selfie in the polling booth?