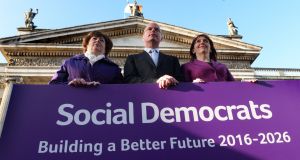 The three prominent Independent TDs who came together to form the Social Democrats in July 2015 are offering what they characterise as a “relatively mainstream” alternative to larger parties.

It would be a surprise if the party’s three sitting deputies – Catherine Murphy from Kildare North, Wicklow’s Stephen Donnelly and Róisín Shortall, who represents Dublin North-West – were not returned the the Dáil.

Ms Murphy’s claims in the chamber last May about businessman Denis O’Brien’s banking arrangements prompted an apparent David-versus- Goliath struggle between the previously low-key deputy and the billionaire.

The subsequent unprecedented stand-off between the political system and the judiciary convulsed the world of Irish media. Ms Murphy seemed to emerge sprinkled with political gold dust and is now an instantly recognisable figure throughout the country.

Mr Donnelly is widely judged to have made the correct decision in quitting the Oireachtas banking inquiry in June 2014, while Ms Shortall, former minister of state for health, has survived and thrived since resigning from the Labour Party in 2012.

Senior figures say the Social Democrats would have liked to contest in more constituencies, but the party has decided to concentrate its fire power on 14 out of the total 40. The party’s chances of securing more seats are slim but it is not impossible.