Simon Harris urges Opposition to be ‘honest’ on Irish Water 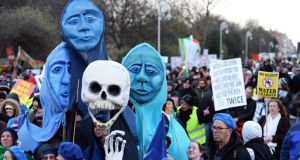 Water protesters on a demonstration at Merrion Square. Minister of State Simon Harris said the Coalition has provided “claritiy” on charges. Photograph: The Irish times

Minister of State at the Department of Finance Simon Harris has called on Opposition parties to be honest with the Irish people after it was reported water charges cannot be scrapped.

It was revealed on Sunday that future governments would be in breach of a European Union directive if they abolished the levy.

Fianna Fáil, Sinn Féin, the Social Democrats and the Anti-Austerity Alliance have all called for Irish Water to be dismantled and the charges to be scrapped. Mr Harris said it was important for the Opposition parties to be honest with people. Speaking as he opened the O’Donovan Rossa and Pearse exhibition at Pearse Museum, the Fine Gael Minister said he had not seen any costed alternative from any politician.

“The Government has provided clarity and certainty in relation to water charges,” said Mr Harris. “That is not forthcoming from other parties who are engaging in populism from the luxury of the Opposition benches.

“I don’t think the Irish people will be fooled. Are Fianna Fáil really attempting to re-run the general election of 1977 where they go around promising everything and worry about how to pay for it later? The Irish people have suffered enough for that.”

Fianna Fáil’s environment spokesman Barry Cowen said it was clear the Government was saving face after a bruising week. “The Government will say or do anything to try to deflect attention from what has been a disastrous outcome for them. Simon Harris, Joan Burton, Enda Kenny, Alan Kelly all said we would pass the Eurostat test with flying colours. They were wrong.

“Now nothing they say on the issue has any credibility. Irish Water is set to cost the Government up to €70 million this year alone. It is time to abolish the super quango instead of throwing more good money after bad.”

The Government is coming under increasing pressure to abolish water charges after Irish Water failed the Eurostat test. However, it emerged yesterday scrapping the levies would breach an EU directive which requires all 28 member states to implement them.

Sinn Féin leader Gerry Adams said his party has been consistent on this issue. “Irish Water and domestic Water Charges are doomed and those TDs associated with supporting them will be seeking to distance themselves . . . the closer we get to an election.”