Big contrast with shambolic way entering the bailout began in 2010 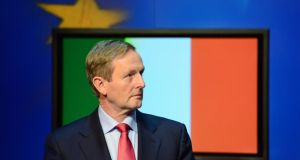 Taoiseach Enda Kenny and his Ministers took the view that everything possible should be done to point up the contrast with the way the State is exiting the bailout by comparison with the shambolic way it began in November 2010. Photograph: Frank Miller

The time and place of the announcement that Ireland will exit the EU-IMF bailout without a precautionary credit line were chosen deliberately to underline the message that the State’s sovereignty has been restored.

It was hugely important for the Government that a decision so critical for the State’s future should be taken by the Cabinet in Dublin and announced immediately in the Dáil rather than after a meeting of the euro zone finance ministers in Brussels.

Taoiseach Enda Kenny and his Ministers took the view that everything possible should be done to point up the contrast with the way the State is exiting the bailout by comparison with the shambolic way it began in November 2010.

The official record of the decision taken at yesterday morning’s special Cabinet meeting to exit the bailout without a precautionary credit line included a reference to the fact that the Taoiseach and Tánaiste Eamon Gilmore would make an immediate announcement to the Dáil.

‘The appropriate forum’
“We wanted to ensure that the announcement to the Irish people would be made properly in the appropriate forum which is Dáil Éireann. Compare that to the way the entry to bailout was announced on Morning Ireland by the governor of the Central Bank, Patrick Honohan, when the government didn’t seem to know what it was doing,” said one senior Government source yesterday.

By going into the Dáil immediately after the Government decision and before Minister for Finance Michael Noonan flew to Brussels, Kenny and Gilmore kept control over how their action would be regarded at home and abroad.

Cold political calculation played a key part in deciding how the news should be presented. The decision to go it alone could very easily have come to be regarded as a reckless throw of the dice but instead the general reaction to date at home and abroad has been positive.

EU leaders
A number of EU leaders, most significantly the German chancellor Angela Merkel, were contacted in advance by the Taoiseach and they did not demur from the Irish decision.

The decision to go without a precautionary credit line has been in the offing for more than a week but Noonan had said that he would not make a final decision until he had all the necessary data. With the EU meeting looming yesterday he came to his decision on Wednesday night.

A key part of the Government’s message yesterday was to try to ensure the Coalition would get political credit for the restoration of economic sovereignty. Getting that will depend on whether the decision proves correct.

If anything goes wrong and it turns out that a precautionary credit line should have been put in place, the country will suffer and the political fallout for the Coalition could be disastrous.