Adams says that if issue goes to referendum in Britain, North should have separate vote 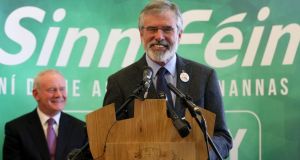 Northern Ireland should be allowed to remain in Europe should Britain vote to exit the European Union, Gerry Adams and Martin McGuinness said today when launching the Sinn Féin manifesto.

The next British government must immediately set up all-party negotiations to try to end the impasse over welfare reform that is threatening the Stormont institutions, the Sinn Féin president and the Deputy First Minister also urged at the manifesto launch in Dungannon, Co Tyrone on Monday.

Mr Adams called for a “dedicated” Northern Ireland plebiscite on the EU in the event of the Conservatives winning the Westminster general election and David Cameron honouring his pledge to hold an “in-out” vote on Europe.

“If there is to be a referendum – and there is no certainty about this – then Sinn Féin believes there must be a separate and binding one here in the North,” he said.

Mr Adams said that if Britain were to vote to quit Europe and Northern Ireland voted to remain then the North should be allowed continue as a member of the European Union.

He said the Irish Government would also have a role to play in ensuring this could happen.

The Deputy First Minister Mr McGuinness said on every economic mission he and First Minister Peter Robinson had made that he heard concern from businesspeople about a UK exit from Europe.

He said it was a “huge issue” in terms of foreign direct investment. He said Britain “appeared to be sleep-walking to an exit from Europe” which “would be absolutely economically disastrous”.

Mr McGuinness said that the first issue for Sinn Féin after the next London administration comes into power is to hold all-party negotiations with the British government on the current impasse over welfare reform.

He said a combination of political, church, trade union, community and voluntary opposition to welfare cuts could be powerful enough to pressurise whatever British government is in power not to impose austerity on the North.

Mr Adams again insisted that even in the event of a hung parliament that Sinn Féin would not end its policy of refusing to sit in the House of Commons. “We are an active abstentionist party,” he said.

Mr Adams also called for a Border poll on a united Ireland during the term of the next Northern Assembly which is due to start in May next year.

Mr Adams complained of an agenda against Sinn Féin. “Our opponents here in the North but particularly in the Southern state are strident, reckless and are engaging in rants against Sinn Féin. There are 500,000 reasons for this – that is the half a million people who voted for Sinn Féin in the last election,” he said.

The launch was held in Dungannon which is part of the Fermanagh South Tyrone constituency where outgoing Sinn Féin MP Michelle Gildernew is campaigning to hold her seat against the main opposition from the agreed unionist candidate, Tom Elliott of the Ulster Unionist Party.

In the last Westminster election in 2010 Ms Gildernew won by four votes. “We are opposed to austerity whether it is from Brussels, London or Dublin,” she said.

Ms Gildernew added that this election and Assembly elections in the North and a general election in the South in the next 12 months would be “fundamental” to Sinn Féin’s ambition to create a united Ireland.