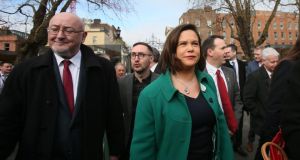 Sinn Féin wants to establish an independent commission to examine the best way to deliver water services, but does not believe its outcome would be the retention of Irish Water and water charges.

Newly-elected Dublin Mid- West TD Eoin Ó Broin told RTÉ’s This Week programme the party believed such a commission could examine the “best possible model of public ownership”. Sinn Féin favours the abolition of Irish Water and water charges but Mr Ó Broin said he has not yet heard “anybody outline a detailed or credible alternative” to the current structure.

The party last week pushed for a Dáil motion on the abolition of Irish Water, which led to criticism from its political rivals. Sinn Féin claimed Fine Gael and Fianna Fáil had combined to block its motion,

Mr Ó Broin has said there were “some sketchy proposals” being made by others on how to replace Irish Water, adding: “That’s why actually we think the best thing to do is to form that independent commission on water services to design the best possible model of public ownership.”

On whether Sinn Féin’s commission could recommend the retention of the existing system, Mr Ó Broin said: “I would be very surprised if any body of experts came back saying Irish Water is the best possible model. I don’t think that scenario is likely but I think that if you set up an independent commission and you ask it to look at the best model of public ownership then I do think there is a responsibility to accept its recommendations when it does come back.”

Meanwhile, Fianna Fáil has selected a four-strong negotiating team to talk to other parties and Independent TDs about government formation, beginning with exploring the option of a Fianna Fáil-led minority government. However, it has no brief at the moment to speak to Sinn Féin. No contact has been made between Fianna Fáil and Fine Gael.

Mr McGrath would be perceived as the senior figure on the team. Mr McConalogue’s stock in the party has risen dramatically since his poll-topping performance in Donegal where Fianna Fáil won two seats and eclipsed Sinn Féin as the dominant party there.

Mr Cowen is seen as having been an effective spokesman for the party on two key issues, Irish Water and housing.