Fine Gael look set to lose almost 30% of their seats and goverened the fastest growing economy in Europe. Where did it all go wrong for Taoiseach Enda Kenny? Sarah Bardon reports. 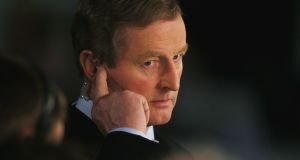 Irish politics is entering a new phase after a sensational general election result which turned much of conventional political wisdom on its head.

The parties are all entering uncharted waters and the ultimate result could well be a rebalancing of the entire political system rather than the novelty of a grand coalition between the two Civil War parties.

The big election winner was Fianna Fáil. The party has come back from the near- death experience of 2011 to more than double its number of seats and come within just one percentage point of Fine Gael in the share of the vote.

The big loser was the Labour Party, which was almost wiped out in the worst election performance in its history. Fine Gael had a deeply disappointing election, losing much more support than it had expected.

Sinn Féin made gains but on nothing like the scale it had anticipated, while the Independents and most of the smaller parties made the gains the polls were forecasting.

All of this raises the question about how a government will be formed.

During the election campaign the Coalition parties presented themselves as the only ones offering to form a stable government. After the election it seems that nobody wants to be in government except Fine Gael.

New reality The only problem is that to all intents and purposes the party lost the election with a drop of more than 10 percentage points in its vote and a loss of more than 20 seats compared with 2011.

So what is to be done? The country has to have a government but, contrary to some of the panicky commentary, there is no immediate rush. The current Government will remain in office until it is replaced so there is ample time for the political system to adjust to the new reality.

Intense speculation about a Fine Gael/ Fianna Fáil coalition is already under way and will dominate the headlines in the days ahead but it is by no means the only option available.

Labour’s great disaster contains a warning for Fianna Fáil. Back in 2011 when Labour had its best election performance it could have stayed out of government and allowed Fine Gael to try and govern on its own.

After all, Fine Gael was not too far off an overall majority and nobody was in much doubt that it would proceed to implement the broad outline of the policies put in place by the previous Fianna Fáil government.

That would have allowed Labour the luxury of opposition and it would probably have emerged as the biggest party by now.

Labour took office with the best of intentions and helped to put the country back on its feet but it has paid a terrible price. There must be serious doubts about whether it can recover as a political force.

Labour’s big problem was that it was blamed for breaking faith with the people who had voted for it. Once it acquired that reputation there was nothing it could do and disaster was inevitable, although the scale of it was still shocking.

In Government Labour actually implemented more of its election promises than Fine Gael but that is not the popular perception.

Appeal to fairness During the election campaign Micheál Martin was adamant he would not go into a coalition in which Fianna Fáil was a minority party. If he breaks that promise and goes into office with Fine Gael he is unlikely to be forgiven by some Fianna Fáil voters.

One of the big reasons for Fianna Fáil’s recovery was its appeal to fairness and its prioritisation of public services rather than tax cuts. As a result of this approach the party managed to recapture a good chunk of its old working-class base. The sure-fire way to lose it again would be to go into government on the back of a broken promise.

There is also the question of whether Martin could carry his party with him even if he wanted to do a coalition deal with Fine Gael. A handful of outgoing Fianna Fáil TDs have stated their implacable opposition to any such deal and some have even threatened to leave the party if it happens.

A special party ardfheis would be required to endorse a coalition. If Martin went into it proposing coalition and it was not endorsed, his leadership could go with it.

Another important factor at the back of many minds in Fianna Fáil, publicly articulated by Limerick TD Willie O’Dea, is that the prospect that a coalition between them would create a massive opening for Sinn Féin and the hard-left parties to emerge as the alternative government.

There is every chance a Sinn Féin-led coalition would quickly become the alternative government by the time the next election comes around and Fianna Fáil would inevitably suffer far more than Fine Gael in that situation.

The other immediate possibility is that Fianna Fáil might try to do a deal with Sinn Féin. Some of the party’s TDs would like that but Martin has invested so much political capital in attacking Sinn Féin it would make no sense. In any case Sinn Féin has ruled out going into government as a minority party.

Paradoxically, the stalemate leaves Fine Gael in a position where it could continue in government for the simple reason that nobody else can, or will, replace it.

The party undoubtedly had a bad election, polling 25.5 per cent of the vote when it expected to be about five points higher. Its seat harvest from its share of the vote looks like being exceptionally good, with more than 50 TDs in the next Dáil.

Enda Kenny is not in the position he hoped but he is still Taoiseach. Over the coming days Fine Gael can be expected to explore the intentions of some of the smaller parties and Independents to see if there is any prospect of Kenny being elected taoiseach when the Dáil meets on March 10th.

Even if he is defeated in a Dáil vote for taoiseach he will remain in office until he is replaced. If the Dáil can’t elect a taoiseach, Fianna Fáil and others will have to start making decisions about how to facilitate the formation of a government.

It will be a test of the validity of the scenario advanced by Fine Gael before polling day about the electorate having to choose between stability and chaos.

Tallaght strategy Martin has said he will act responsibly. That could involve him allowing a Fine Gael-led minority government to govern under certain conditions. This is a regular feature of continental politics and there was a brief experiment with it here between 1987 and 1989 during the famous “Tallaght strategy” adopted by Fine Gael leader Alan Dukes to support a minority Fianna Fáil government under certain conditions.

There are many misconceptions about what happened to the Tallaght strategy but it is worth remembering Fine Gael did not suffer as a result of it. The party actually gained votes and seats in the 1989 general election, although not enough to get into government.

It is also worth remembering the Tallaght strategy did not unravel because the party supporting the government lost its nerve. It came to an abrupt end because taoiseach Charles Haughey mistakenly thought he had an opportunity to win an overall majority.

Minority governments supported from the opposition benches are a regular feature of politics in many other European Union countries. In Denmark last year an extraordinary situation developed when the third-placed Liberal Party, on just 19 per cent of the vote, took office with the tacit support of the populist Danish People’s Party, which had just over 20 per cent but declined to go into government.

Fine Gael as the biggest party in the Dáil can make a legitimate claim to being in the best position to form a government. Ideally it would need to negotiate a deal with others but even without a formal programme for government it could still function.

It would require a massive change in how Irish politics works with a shift in power from the executive to the Dáil. The new government would have to negotiate with other parties and forces in the Oireachtas to get its legislation through but that might be no bad thing.

The annual budget is the only measure that a government absolutely has to get through the Dáil. If support from Fianna Fáil was required to get it passed, then the party would clearly have to have an input into it.

Irish politics could well be in for a more profound change as a result of this election than from the last one in 2011.