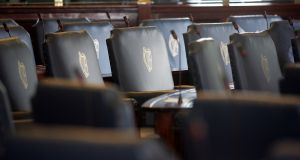 The Seanad will resume its debate on the Protection of Life During Pregnancy Bill. Photograph: Alan Betson/The Irish Times

The Seanad has resumed its debate on the Protection of Life During Pregnancy Bill.

The legislation, which is at the report stage, provoked controversy during debate in the House last week.

Fianna Fáil Senators clashed during heated exchanges over graphic remarks about abortion made by some members of the party.

Fine Gael Senator Paul Bradford claimed the Bill provided for abortion. “It goes against the very fabric of my party, and what we said before and during the general election campaign.’’

His party colleague Fidelma Healy-Eames asked why the Government was proceeding to sanction the taking of an innocent baby’s life when there was no evidence that this would save the baby’s life.

“The evidence shows that abortion may damage the woman mentally.’’

The Senators later voted against the Government on the Bill and automatically lost the party whip.