Same-sex vote the moment where social media proved its mettle 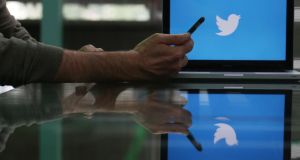 One online campaign during the Same-sex Marriage Referendum in Ireland build-up was the #hometovote phenomenon, which had huge purchase with emigrants. In its own way, this imaginative innovation was the perfect illustration of the way in which the Yes campaign had captured public imagination and popular support. Photograph: Chris Ratcliffe/Bloomberg

This has been the moment where the social media phenomenon has come into its own in an Irish electoral contest.

Platforms such as Facebook, Twitter, WhatsApp and YouTube have been key influencers, not only in terms of massaging, but also in motivating younger Yes supporters to ensure their beliefs were translated into actual votes.

There is no doubt digital platforms have played an increasing role in Irish election campaigns over the past decade, but their impact has been relatively limited compared to more traditional means of communication such as broadcasting and newspapers (although increasing numbers now consume news online).

Social media played a part in the 2011 general election campaign - Fine Gael had a clever digital strategy - but it was not one of the main determinants in shaping the debate, or indeed the outcome.

Why the scope of social media was limited was attributed in part to the fact its main users were younger (and less likely to vote).

Because of that, social media platforms, Twitter in particular, were seen as an echo chamber where those with particular viewpoints reinforced their own beliefs.

In a general election contexts, the tools have (until now) been perceived as limited in reaching out, or persuading, the general population.

But a referendum on same-sex marriage is a horse of a very different colour in electoral terms. It presents a binary option on a specific issue - which attracts huge buy-in from younger voters. As such it has proved to be tailor-made for a campaign to be played out largely on social media.

What was striking about this referendum was the phenomenal engagement on social media, particularly among the young.

Facebook posts from Yes Equality during the last week of the campaign had a combined reach of 1.6 million, with a very high level of engagement - there were some 112,000 like comments on posts, or sharing of them, in the seven days leading up to the poll.

Craig Dwyer, the social media co-ordinator for Yes Equality says its Facebook site was liked by over 65,000 people and its Twitter account attracted a total of 16,000 followers since both were set up last November.

He said some of the videos embedded on its sites have had enormous viewership - including those featuring Mary McAleese and Daniel O’Donnell, as well as Madeleine Connolly, a 90-year-old woman who called for a Yes vote.

The Yes Equality hashtag has had a reach of over 2 million in any given two-day period, said Mr Dwyer.

In contrast, the main group advocating a No vote, Mothers and Fathers Matter, was most visible on YouTube and on its web page - neither its Facebook nor Twitter sites were accessible on Friday.

One video clip posted by Mothers and Fathers Matter on YouTube in the last week attracted almost 700,000 views. In it, two gay men, Keith Mills and Paddy Manning, outlined why they were voting No in the referendum.

In reality, the No side neither had the resources nor the volunteers (nor the followers) to mount a countervailing campaign on social media.

It was not just the messaging. Yes campaigns (and they included political parties) used social media very effectively to encourage younger voters to register (and some 65,000 did), as well as mounting a very high-profile get-out-the-vote campaign in the past week.

Political parties were also very active on social media, and then there was unorganised, organic and spontaneous campaigns that emanated from Twitter or from Facebook accounts of individual campaigners.

One such campaign was the #hometovote phenomenon, which had huge purchase with emigrants. In its own way, this imaginative innovation was the perfect illustration of the way in which the Yes campaign had captured public imagination and popular support.

It was also significant that the Referendum Commission had a very visible presence in terms of explaining the issues surrounding surrogacy and abortion.

So does this signify a change in the way elections are run? Not quite. Dr Theresa Reidy of the Politics Department in UCC said that if turnout is high then the question of whether or not social media was a major mobilisation factor will need to be examined.

She cautions whether it will have wider application just yet.

“This is an issue which for young people is very salient and matters a great deal to them. That is not to say the same kind of thing can work for a general election.”

She said such “post-modern campaigning techniques” have moved from the margins and are now part of the mainstream.

Because younger voters had attached such an importance to this issue, there was a level of engagement that might not be carried through to other polls, she added. As “digital natives”, social media was a natural communications channel for this cohort.

On Friday, referendum hashtags such as #marref2015, #turnout and #hometovote were trending strongly on Twitter. On Saturday it’s #proudtobeirish.

The day belongs to Yes. It also belongs a little to social media.