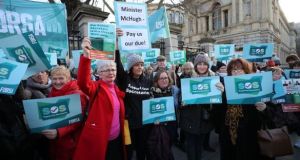 School secretaries gathered for a rally at the Dáil in January this year. File photograph: Nick Bradshaw/The Irish Times

The Government wants to regularise the employment, terms and conditions and pension rights of school secretaries, Tánaiste Leo Varadkar has told the Dáil.

He said the Government “really does value the essential work that’s done by school secretaries and school caretakers.

“Very often the school secretary is the first person you meet on the way in to a school, and the caretaker is the last person to leave in the evening,” he said.

“Schools would not operate without them, and I think that the role they play in our education system is as important as that played by school teachers, SNAs (special needs assistants) and school principals.

“For that reason, it is the objective of this Government to regularise their employment, their terms and conditions and their pension rights as well. But that can only be done going forward, it can’t be done retrospectively.”

Mr Varadkar was responding to Independent TD Sean Canney who raised the case of more than 1,000 school secretaries who he said were not being treated equally in their pay and conditions of employment.

Fórsa, the union representing the secretaries, plans to serve notice of industrial action to more than 1,000 schools.

The union welcomed the Tánaiste’s remarks. Fórsa’s head of education Andy Pike said: “This is something of a breakthrough moment in a decades-long inequality which school secretaries and caretakers have been striving to correct for many years.

“Now that we have this commitment on the Dáil record, our question is how soon will officials act to make this a reality for these vital school staff? Our members have readied themselves for industrial action.”

The secretaries are paid through annualised grants to their schools, rather than directly by the Department of Education in what the union described as a two-tier system where the secretaries earn €12,500 a year and are on short-term and forced to sign on during the summer holidays and other school breaks.

Mr Canney called on the Government to refer the case to the labour Court as he said had been pledged by then minister for education Joe McHugh in the Dáil a year ago.

The Galway West TD said the more than 1,000 are “working side by side with secretaries in other schools in their towns and villages who are getting their full pay and being treated as public servants with holiday pay and entitlements”.

Mr Varadkar said the Departments of Education and of Public Expenditure and Reform are considering the request to refer the case to the Labour Court.

He reiterated there were “technical issues” because the departments and the school management bodies were not the employers.

Mr Varadkar said it was regrettable that the union was considering strike action because “any such action would have a day-to-day impact on the operation of schools at this critical time and would disrupt tuition for students who have only recently returned to school after a six-month gap”.

The Tánaiste said the secretaries wanted “to be public sector employees, like teachers and other secretaries in the public service, working in local authorities or Civil Service departments”.

He pointed out that “secretaries and clerical officers working in departments and local authorities work year-round and only have a few weeks of annual leave.

“Many of those issues have to be worked out because equality must be defined in that context.”

The issue could not be dealt with retrospectively, he stressed. “The resolution can only be a prospective one but we do want to resolve this.”

This will be followed by an indefinite strike commencing from Monday November 16th with notice to be served to schools and the department on October 15th.