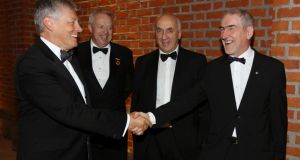 Peter Robinson’s speech at a dinner honouring the peace-building work of the GAA shows how things are “moving forward”, the former president of the sporting body Sean Kelly said today.

The Fine Gael MEP said the Northern Ireland first minister’s comments would be “taken on board by everyone in the GAA”.

Mr Kelly said Mr Robinson came out “bravely and accurately” and acknowledged the work done by the GAA for integrating people into the community.

On Thursday Mr Robinson broke community and political ground when he attended the Co-operation Ireland dinner at Queen’s University, Belfast.

“It is a sign of just how much things have changed that the GAA plays such a positive role as a delivery partner in this worthwhile project. I believe that this programme is making a real contribution to the lives of young people in the province and I believe that the buy-in of the GAA ensures that it has a reach right across the community,” he said.

Speaking on RTÉ Radio today Mr Kelly said the GAA was “now more acceptable than ever before” in the North and was able to promote its games and reach out into the communities.

Mr Robinson was showing that despite misgivings “ we are moving forward and looking at the bigger picture,” he said.

“As Mr Robinson said show leadership, move ahead, by turning out and showing the hand of friendship...I think that’s going to break down all the barriers we had traditionally,” he said.