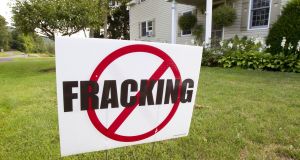 Environmental groups also argue the use of fracked gas or oil also contributes greenhouse gases to the atmosphere at a time when the Paris Agreement has ratified a move towards global carbon neutrality by the end of the century. File photograph: Michael Okoniewski/Bloomberg via Getty Images 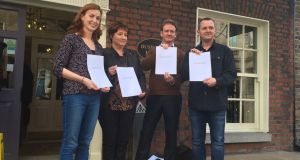 Kate Ruddock of Friends of the Earth, Attracta Uí Bhroin of An Taisce, Scott Coombs of Love Leitrim and Richard Boyd Barrett TD with copies of the Prohibition of Hydraulic Fracturing Bill 2015. Photograph: Harry McGee /The Irish Times

A TD will present proposed legislation to the Dáil on Thursday that would completely ban any hydraulic fracturing (fracking) in the State.

The private members’ Bill from Richard Boyd Barrett, the Prohibition of Hydraulic Fracturing Bill 2015, was drafted by environmental groups Friends of the Earth and An Taisce, both of which the TD has strongly supported.

The Bill provides for the prohibition of any undertaking, permit or licence to explore, prospect or extract shale gas using fracking or any other method.

If approved, the Bill would also prevent any State body or representative from engaging in such activities.

Hydraulic fracturing is the method used to extract shale gas. Water is pumped at such high pressures it fractures the rock, giving access to the shale gas. Fracking is now used extensively in the US and Canada but it has been highly contentious on a large number of grounds.

The chemicals used in the process, the waste by-product, the size of the operations and the impact on groundwater have all been widely criticised on environmental and health grounds.

Environmental groups also argue the use of fracked gas or oil also contributes greenhouse gases to the atmosphere at a time when the Paris Agreement has ratified a move towards global carbon neutrality by the end of the century.

An area around the border, located mainly in Co Leitrim, has been identified as having potential for shale deposits.

The Department of Communications and Energy has commissioned a study on various issues surrounding fracking, and a departmental decision will not be made until that report has been completed.

Campaigners have criticised the process and said it will take an industry-side view of the issue and will determine only if fracking can be carried out safely, rather than deciding on whether or not it should be allowed at all.

Outlining the contents of the Bill at a press conference on Thursday, Mr Boyd Barrett said noble aspirations had come out of the Paris summit to reduce fossil fuel emissions.

“The big worry is, will that noble objective be matched by real action on the ground?”

He said use of shale gas through fracking would add to carbon dioxide emissions.

“That’s simply a statement of fact. That’s what we are calling for, for [Minister for Energy] Alex White to match words with deeds.”

Kate Ruddock of Friends of the Earth, who co-drafted the legislation, said climate change did not seem to be a priority for the Taoiseach.

She said fracking was plain wrong and if the world was to limit global warming to 2 degrees Celsius, it would have to keep two-thirds of fossil resources underground.

“It’s just plain wrong. There is no place for it in the future,” she said.

The Bill’s other co-author, Attracta Uí Bhroin of An Taisce, said if there was any real commitment on the part of the Oireachtas for dealing with fracking in the proper manner, there should be no bar to putting in a statutory prohibition on it.

“I call on Government to support the Bill,” she said.

Scott Coombs of Love Leitrim said his group, which campaigns against fracking in the county, regarded the Bill as a major milestone.

He said when the procedure was first mooted in Leitrim, nobody could prove it caused damage. “Since there has been a (large) amount of peer review research showing showing damage to humans and to the environment.

“There is nothing to like about fracking. It flies in the face of the Government’s White Paper on energy and any attempt to limit climate change.”

Mr Boyd Barrett said it was unlikely the Bill would be debated in the Dáil before the general election, but he would ensure it would get private members time next year if he was re-elected.