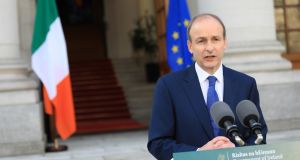 Micheál Martin said moving out of the pandemic was not just something to be talked about in the future tense, but rather a present-day reality thanks to “transformative” Covid-19 vaccines. Photograph: Julien Behal Photography/PA Wire.

This was supposed to be the week that the Government finally offered people a glimmer of hope for the future and reset the narrative around its handling of the Covid-19 pandemic.

Ministers went into Tuesday’s Cabinet meeting buoyant in the knowledge that an easing of the tough restrictions in place since Christmas, albeit in an ultra-cautious and phased manner, was set to be announced.

But two political grenades were thrown during the meeting and an apparent opportunity to deliver some good news became totally overshadowed.

The first arrived just as proceedings kicked off.

Taoiseach Micheál Martin, sources said, made a passing reference to new mandatory hotel quarantine proposals, but said further consultation was needed and there was no need for any great level of discussion.

In fact, this lack of discussion about adding 43 countries to the “high-risk”, compulsory quarantine, list – including France, Germany, Italy and the US – blossomed into a very public head-to-head between Ministers.

The second grenade came soon after.

Minister for Health Stephen Donnelly unveiled proposals to overhaul the State’s vaccination rollout – reverting to an age-based system from one that prioritised age at first but then certain professions.

There was a momentary silence.

Minister for Education Norma Foley, who is due to address teaching union conferences next week and is awaiting the full return of schools from April 12th, was surprised, sources said. She was said to have had no idea this plan was afoot, and teachers and special needs assistants, who had been higher up the priority list, have since clearly stated their displeasure.

Minister for Justice Helen McEntee expressed concern about the impact this would have on gardaí, who had similar expectations given that their duties often lead them to high-risk situations.

The ensuing conversation was described as “robust” – a political way of saying things became heated. With the prospect of yet another live address to the nation looming at 6pm, the Taoiseach wrapped the meeting up while misgivings remained.

In his address, he said moving out of the pandemic was not just something to be talked about in the future tense, but rather a present-day reality thanks to the availability of “transformative” Covid-19 vaccines.

Martin said “they are our way out” before promising that six million doses would be administered by the end of July, once deliveries arrive as expected.

After weeks of being accused of losing the public’s faith because a long-term plan was lacking, he also gave a fleeting glance of what was to come – hairdressers and more retail opening in May, with hospitality following in June or July.

The overall gist was that while the branches have been bare for many in recent months, if the country could hold on for another few weeks the buds of summer would eventually bloom. The address was relatively well-received within the three Coalition parties.

Yet within hours, the changes to the vaccination programme were overshadowing his long-awaited announcement.

Wednesday’s meetings of the Fine Gael and Fianna Fáil parliamentary parties saw tensions over the issue rise to the surface and exposed what is viewed as the growing vulnerability of both party leaders, particularly Martin, as he and Tánaiste Leo Varadkar came under pressure from their TDs and Senators to explain the rationale behind the vaccine system overhaul.

Fianna Fáil Dublin South-West TD John Lahart told the meeting there should be a “conversation” if the party does not see a polling bounce from the vaccine rollout ramping up or from the relaxation of restrictions.

The comments carried a faint echo of a remarkable 2017 intervention by Varadkar and Simon Coveney during a Fine Gael parliamentary party meeting when Enda Kenny was leader. They warned of the need to be “election ready”, which was interpreted as a signal to Kenny that he had to stand down soon.

Four years later, the cracks are also beginning to show for Varadkar.

During the online Fine Gael meeting, he came under fire from Carlow-Kilkenny TD John Paul Phelan, who has supported him for years. In the meeting’s web chat function, Phelan argued that the list of priority workers had effectively been scrapped.

“Not quite,” said Varadkar, “the list of workers/professions was never defined.” Phelan said the answers offered were “tone deaf and there is an underlying tone about colleagues raising issues which is utterly unacceptable”. The significance of this exchange among two former allies was lost on no-one .

In another stroke of bad luck, it emerged just after the party meetings that Donnelly’s plan to add major EU nations and the US to the quarantine regime was in deep trouble. Concerns came from the Departments of Foreign Affairs and Enterprise, and the Attorney General. There was much exasperation.

“The homework was not done here,” said one senior figure, “but what is new?”

It was almost as if a scroll of problems had been unfurled.

Was there capacity in the hotels to add all arrivals from the 43 countries? What happens to vaccinated people? Would it be legal or in line with EU free movement rights?

Speaking on Highland FM shortly before meeting Donnelly on Thursday, Coveney, the Minister for Foreign Affairs, said he did not believe the system should be applied to countries where large numbers of Irish people live.

As reported in this newspaper, this comment drew sharp derision from officials in the Department of Health, who said the whole point was to stop Ireland importing more Covid-19 cases and variants from any place that posed a threat.

Since then, some disquiet has emerged within Fine Gael about Coveney’s stance.

“He has left himself very exposed here,” a party source said comparing the intervention to Varadkar’s public show of displeasure about a proposed move to Level 5 restrictions back in October. “If there is a fourth wave in a few weeks, people will remember those comments. He has taken a risk in going against public advice.”

The row over hotel quarantine will rumble on, too. It was agreed that the EU countries and the US would, for now, not feature on the list. But Donnelly is said to be adamant that they will be added.

Seasoned observers in Government say the good news was drowned out by issues that the Cabinet failed to get on top of, and that the public got an insight into the dysfunction which has some Ministers concerned for the months ahead.