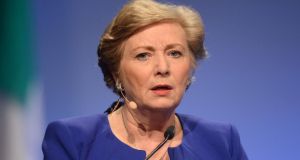 Minister for Justice Frances Fitzgerald is to introduce tough measures for repeat burglars including consecutive sentences and tougher bail restrictions.

Ms Fitzgerald is to bring a memo to Cabinet on Wednesday seeking a crackdown on repeat offenders. It is expected she will move to allow for consecutive sentencing at District Court level for the first time. Currently, those convicted of multiple offences can serve several sentences concurrently.

The Minister will also strengthen powers of judges to refuse bail to serial burglars. The new restrictions will apply to those who have two or more charges of burglary pending. This is expected to be the first in a series of measures to be announced between her department and the Garda.

Ms Fitzgerald is concerned that a small number of criminals appear to be carrying out a large number of break-ins. She met senior gardaí in February to raise concerns over the number of burglaries, particularly in the Dublin area.

Ms Fitzgerald also asked her officials to carry out an inspection of the legislative response to repeat offenders. She first raised her plans to tackle burglary at the Fine Gael national conference earlier this year. She told party colleagues this was a heinous crime that affected families across the country.

“One way or the other, this Government is demanding action on the burglary front – and it will get action, so that when we meet next year, we will see provable improvement,” she said. Her department has been working on the plans for a number of months and the changes are expected to be agreed at Wednesday’s Cabinet meeting.