Referendum on abolition of Seanad likely to take place in October 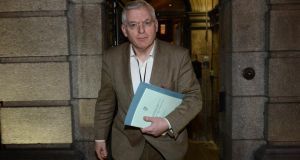 
The referendum on the abolition of the Seanad is likely to take place in October, the same month as the budget.

Taoiseach Enda Kenny also told the Dáil that one of the three referendums originally intended to be held on the same day would be postponed.

He said the Government had decided not to go ahead with a referendum on the patents treaty but to delay it until next year. “It would not be feasible to do that this year because there were a number of issues from a European perspective that were not clear yet”.

He said “it would be more appropriate to hold that referendum as one of a number next year”.

A second report from the constitutional convention made up of parliamentarians and other groups as well as members of the public, is due to be received in July. The convention has debated a number of issues including the role of women as represented in the Constitution and the issue of same-sex marriage which the convention supported.

Mr Kenny said the Government would “make its views known” on the issues in that report “possibly or probably for decision by referendum by 2014”.

Speaking about the proposed referendum on the abolition of the Seanad, he said the final date had not yet been set because of a “very busy schedule” of legislation to be dealt with in the autumn, but the Seanad referendum would probably be held in October.

On the same day a referendum would also be held on the court of civil appeal because of the backlog that had built up in the higher courts.

If the electorate decides to abolish the Seanad, the Upper House would continue to sit until just before the return of a new Dáil after the next general election.

He said legislation to allow for the referendum to go ahead would include all the issues relating to the references, direct and indirect, throughout the Constitution.

Socialist TD Joe Higgins said his party had long called for the abolition of the Seanad, which he described as a “rotten borou gh . . . There is no vote in the Seanad for ordinary working people who did not have the opportunity to attend third level.”