Redress for mother and baby homes could cost up to €1bn 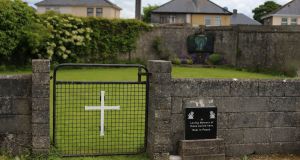 The site of a mass grave for children who died in the Tuam mother and baby home in Galway. File photograph: Niall Carson/PA Wire

Extending the institutional child abuse redress scheme to those who lived in mother and baby homes as unaccompanied children could cost as much as €1 billion, the Cabinet has been told.

The Government has decided that it is “not possible” to implement such a recommendation from the Commission of Investigation into Mother and Baby Homes.

The proposal was contained in the commission’s second interim report, which was published yesterday despite having been submitted last autumn. Its central recommendation of reopening the previous scheme caused alarm in the Government and delayed its publication for months.

The Cabinet finally decided against extending the original 2002 scheme, which cost €1.5 billion up to 2015 because of cost and legal implications. The initial estimated cost of the 2002 scheme was €250 million.

However, the prospect of future redress for those who spent time in mother and baby homes was not entirely discounted, and the Government will ask religious orders to carry some of the cost in future.

A memo to yesterday’s Cabinet meeting said that at an “appropriate point”, the Government could seek to “engage with the religious orders in relation to a contribution to the cost of any such supports and ultimately to the longer-term cost implications of the commission when it finishes its work”.

It also said that if the 2002 scheme was opened to an estimated 14,400 people who would become eligible under the latest proposals, the cost to the State would be €900 million. Ministers also said the associated legal costs could be some €100 million or more.

The €900 million figure is based on applying the average €62,250 payout per person in the 2002 scheme to the 14,400 additional people. Even this is acknowledged to be an “unreliable” estimate.

It was also argued in the memorandum that extending the scheme “or establishing a similar alternative would lead to claims from many other disappointed groups for similar treatment, with huge financial implications for the State”.

The Government said the Commission of Investigation into Mother and Baby Homes “has made no finding to date about abuse or neglect in these homes”, adding that it does not want to preempt its final findings.

“The State would be seen as admitting liability (whether implicitly or explicitly) if it were to indicate an intention to scope out or prepare a redress scheme now.”

One Minister said that if the Government were to accept the redress recommendation from the commission, then the “sky” would be the limit for potential future liabilities for the State.

“This would be a whole new level,” the Minister said. “No findings of negligence or wrongdoing, not Government-regulated. Basically, the judge found the State should be liable for any harm done in any place it funds: sports clubs, schools, charities.”

The commission of investigation will continue its inquiry into mother and baby homes, and Government sources did not rule out a smaller redress scheme when it completed its work next February.

The memo said that rejecting the proposals of the commission “outright” would be “unlikely to be publicly acceptable or to survive a Dáil motion”.