Council looks set to have at least 10 new faces 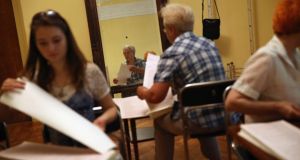 The big winners on the northside of Cork City are Sinn Féin who will gain a seat in Cork North East through newcomer Stephen Cunningham, who is vying with Workers’ Party veteran Cllr Ted Tynan to top the poll on about 20 per cent in the four-seater. Photograph: Dan Kitwood/Getty Images

A recount and recheck in two Cork city wards have delayed the final result and the ultimate composition of the new 31 seat council, which looks set to have at least ten new faces following a day of electoral carnage on Leeside in particular for the Labour Party.

In Cork South West ward is undergoing a full recount after Fine Gael’s backrunner, Barry Keane, requested the move when he found himself seven votes behind Mick Murphy of the Green Party and facing elimination following the fifth count.

Fine Gael’s John Buttimer had topped the poll - the only Fine Gael candidate to hold his 2009 share of the vote - and he was followed home on the first count by Sinn Fein’s Cllr Henry Cremin while Fianna Fail duo of Fergal Dennehy and Cllr Mary Shields were returned on the second count.

At the time that Mr Keane sought a recount, he was in a battle for the last three seats with running mate PJ Hourican, Labour’s Ger Gibbons, Independents Thomas Moloney and Thomas Kiely and Mick Murphy of the Greens with Mr Hourican and one of the Independents fancied to win through.

For former Green Party TD Dan Boyle the election in Cork South East proved a bridge too far as he went out at the end of the seventh count with 802 votes, having opened his account with 505 first preferences in the ward where he was first elected in 1991.

Marion O’Sullivan of the Anti-Austerity Alliance - an activist with the We the People community group in Knocknaheeny - created a little bit of electoral history in Cork becoming the first woman to be elected for the North West Ward since it was established in 1967.