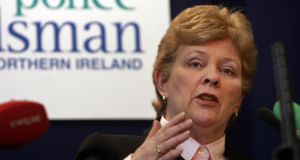 Mr Maguire’s office has complained that it has been turned down on more than 100 occasions by the PSNI which claims it has a duty to protect individuals.

However, Dame Nuala O’Loan said the law is clear and that the chief constable must comply with the Police Ombudsman’s request.

“There is no reason for any negotiation or anything,” she told BBC Northern Ireland.

“The chief constable is under duty to pass the information over. The responsibility is then on the police ombudsman to take such measures as are necessary to protect the lives of any informants.”

She added: “The police cannot argue that they have no duty to hand this information over. It’s absolutely explicit. Parliament made its will clear.”

Mr Baggott announced yesterday he has brought forward his retirement date to the end of this month. George Hamilton, his successor, takes up office on June 30th and will have to contend with any legal action mounted by Mr Maguire on top of any issues arising from the coming loyalist marches in July and throughout the summer.

Dame Nuala O’Loan was the first Police Ombudsman, appointed in 1999, who was in post when sweeping police reforms were enacted and the former RUC was replaced with the PSNI in late 2001.

She clashed publicly with former chief constable Sir Ronnie Flanagan over his force’s handing of the Omagh bombing investigation, underscoring the independence of her office.

She stood down in 2007 and was appointed to the House of Lords.