PSNI chief warns ignoring the past will have consequences 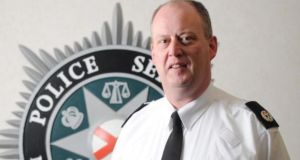 PSNI chief constable George Hamilton who said the status quo in Northern Ireland is simply not an option. Photograph: Reuters

The British and Irish governments should become involved if Northern Ireland politicians fail to deal with the past, the PSNI chief constable George Hamilton has said.

Mr Hamilton expressed his frustration at the failure of the North’s politicians to come to grips with the legacy of the Troubles when he spoke at the British Irish Association conference in Oxford at the weekend.

“The status quo is simply not an option,” he said when reflecting on how talks late last year chaired by US diplomat Dr Richard Haass on the past, parades and flags concluded unsuccessfully.

“My view is that action is needed if policing, and indeed our peace process, is not to be dragged backward,” he said. “I fully accept that reaching agreement on such a challenging issue is not easy. But, to continue to ignore, hesitate or procrastinate on the past will have unpredictable and far reaching consequences,” he warned.

“If our own politicians cannot reach consensus on the issue, then it would seem appropriate and necessary to seek and accept much more ‘hands on’ support from the British and Irish Governments; and indeed other interested and influential observers of our peace process,” said Mr Hamilton.

Through the Historical Enquiries Team (HET), which is part of the PSNI and is temporarily in suspension, Mr Hamilton has overall responsibility for dealing with more than 3,000 murder cases of the Troubles going back to 1969.

He bluntly told the conference that most of these cases will not be resolved.

“The very cold reality is that the older a case, the harder it is to prosecute. While some cases will lend themselves to further progress through the judicial system - with forensic science providing the greatest opportunities - judicial closure is increasingly unlikely in the majority of cases,” he said.

“Memories have faded; witnesses and suspects may have died. The hurt however will not have faded and many families still have questions they want answered.”

And he added: “It would be both unfair and irresponsible not to make clear the significant strain that the current piecemeal approach to our history is placing on the organisation I have responsibility for leading.

“The strain is being felt both in terms of operational resources and, significantly, in terms of public confidence.”

Mr Hamilton said even if he had “infinite financial resources” he could not deal with the cold cases demand at the rate that is required “because we have a limited number of officers and staff with the specialist skills and knowledge required for investigation and disclosure”.

“And the reality is that I do not have infinite resources. In fact, I face a rapidly reducing budget, with the level of cuts now so deep that there will be a substantial impact on our service delivery. Our priority must be to keep people safe in the present day.”