Legislation unlikely to come before Oireachtas until the autumn 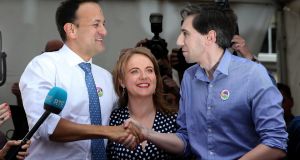 The Government will move quickly to implement the decision of the people and legislate for abortion services, the Minister for Health, Simon Harris, has said.

However, Government Buildings has confirmed that the abortion legislation will not come before the Oireachtas until the autumn.

Following the landslide victory in last Friday’s referendum, Mr Harris told The Irish Times the people had spoken and it was the job of the Oireachtas to implement that as soon as practicable.

Saturday’s count showed that 66 per cent of the 2.15 million voters who went to the polls backed the proposal to remove the Eighth Amendment from the Constitution, while 34 per cent voted to retain it. Turnout, at 64 per cent, was extremely high for a referendum.

With calls yesterday from repeal campaigners and political leaders for rapid progress in providing abortion services in Ireland, Mr Harris will meet Department of Health officials today to assess how quickly the heads of a Bill can be published. It is also expected he will hold a meeting with the Opposition to inform them of the next steps.

Despite the result of the referendum, abortion will remain illegal until the Oireachtas passes new laws to repeal existing laws and provide a new legal framework for abortion.

The Government has published draft heads of a Bill which give a summary of the objectives of the new law. Full heads are expected to be published by the summer, but the full text of the legislation will not be completed and ready to be tabled in the Dáil until the autumn.

However, there are other factors that will form part of the discussion, including the drawing up of clinical guidelines by medical practitioners and the regulation of the abortion pill in Ireland.

This will have to be certified by the Health Products Regulatory Authority and may take a number of months, it is understood.

Speaking to The Irish Times, Mr Harris said: “The people have voted in resounding numbers to give a mandate to myself and the Oireachtas to legislate. It is imperative that the legislation is passed as soon as possible but it is also important to acknowledge the need to put in place clinical guidelines and regulation of medicine. The people have given a green light.”

It is expected there will be a number of minor changes to be made to the legislation but the “fundamental tenets” will remain the same.

Together For Yes campaign co-ordinator Orla O’Connor said yesterday that the Irish people had given the Oireachtas a strong mandate to introduce the legislation quickly.

Ms O’Connor said women would still have to travel to the UK to access abortion until any new legislation was passed and said special sittings of the Oireachtas should be considered to ensure the law was passed quickly.

A survey of TDs who were previously opposed to the Government’s proposed legislation shows that many of them now say they will support the Bill when it comes to the Oireachtas. Others say they will not oppose the Bill, and several warned against attempts to obstruct or delay the passage of the legislation.

Meanwhile, spokesmen for Taoiseach Leo Varadkar and for the Fianna Fáil leader Micheál Martin said the legislation should be introduced as soon as possible.

Mr Varadkar’s spokesman said it was the Government’s intention to have it “through the Dáil and Seanad perhaps as soon as September and October but certainly completing all stages before the end of the year”.

A spokesman for Mr Martin said it was the party leader’s belief that the Oireachtas should move quickly to enact the will of our people.

Both the Sinn Féin leader Mary Lou McDonald and Labour Party leader Brendan Howlin urged the Government to bring forward the legislation as soon as possible.

Mr Howlin said the Dáil would sit until mid-July “providing significant time between now and then to progress this”.