President has free run and should continue to speak out

Column: Michael D Higgins can resist any Government demands that he seek prior approval for statements 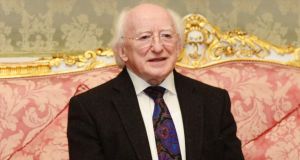 President Michael D Higgins was saying the current ethos of the EU project, founded on the idea that markets know best, irrespective of the social cost, is an abomination. Photograph: Frank Miller

There was nothing Michael D Higgins said to the European Parliament or in his interview with the Financial Times that the Government can complain about, although it is likely the Government disagrees profoundly with some of what he said. And the reason they can’t complain is they can’t own up to disagreeing with him, without causing further tensions within the Coalition. If one strips away the clever obfuscatory verbiage, couched in dense sociologyese – an accursed affliction for which there is no cure – Michael D was saying the current ethos of the EU project, founded on the idea that markets know best, irrespective of the social cost, is an abomination. The trouble is that Fine Gael thinks the EU ethos is just fine and there should be more of it, while the concurring Labour Party knows it cannot admit to that concurrence, so it has to pretend to go along with Michael D. For reasons I explain below, Michael D seems to be in a position to tell the Government to shove off anyway, if there is any future demand that he seek prior approval for other such orations.

1937 Constitution
In introducing the draft of the 1937 Constitution to the Dáil on May 11th, 1937, Éamon de Valera said: “Nobody would propose getting the whole people to elect a person [as president] unless it was proposed to give him substantial powers” (the sexism was de Valera’s). Two paragraphs later he was saying exactly the opposite:

“The powers that are given to the president in what I might call the executive domain are relatively small.” He was keen to emphasise in that speech how negligible were the functions to be given the president, as an early criticism of the draft Constitution was that it seemed to accord that officeholder “dictatorial powers”.

Piece of baloney
But this was just a piece of baloney. There are just seven discretionary powers the president has under the Constitution and everything else he does is conditional on what is called the “advice” of the government. And, of these seven discretionary powers, five are hardly worth mentioning. The two worth mentioning are: the right to refuse a dissolution of the Dáil to a taoiseach who has lost the support of a majority in the Dáil (article 13.2.2); and the discretion to refer a Bill to the Supreme Court to test its constitutionality (article 26). The five barely worth mentioning are: to convene a meeting of one or both Houses of the Oireachtas (article 13.2.3); an entitlement to address the Houses of the Oireachtas (article 13.71) but this is qualified by the requirement that any such address must get the “approval” of the government (article 13.7.3); the right to refer a dispute concerning a money Bill to a committee of privileges (article 22,2.2); his/her concurrence is needed to permit the government and a Dáil majority to restrict the time the Seanad may debate a Bill (article 24.1); and a discretion to refer a Bill to the people in certain circumstances where the Dáil deems a Bill to have been passed, without the consent to the Seanad (article 27). The president’s hands might seem to be tied by article 13.9 which states that except in instances where the president has absolute discretion, “the powers and functions of the president conferred by the Constitution shall be exercisable and performable by him only on the advice of the government”.

Explicit powers
But that refers only to the explicit powers conferred by the Constitution – there is no such restriction on what the president says and does otherwise. Indeed the specific requirement in article 13.73 that a presidential address to the Oireachtas has to obtain the “approval” of the government would seem to suggest that other addresses, such as one to the European Parliament, does not need such approval. I think this was Mary Robinson’s view of her powers when she held the presidency.

So Michael D has a free run and we should urge him to go for it. No need for obfuscatory verbiage. Just tell it as you see it. The free-market ethos of the EU, irrespective of its social cost, is a recipe for deepening inequality and the misery of the masses. The dwindling of democracy by the machinations of the domestic and Euro elites.

These must be confronted and defeated here, in Brussels, Strasbourg, Frankfurt, Berlin and everywhere else in the EU.