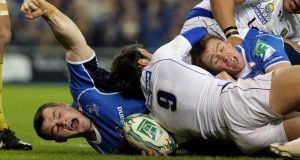 While drinks companies and sporting bodies never made any secret of their disdain for any sponsorship ban, the FoI records point to a concerted push by a well-resourced and well-informed industry to bring its concerns directly into the heart of Government. Photograph: Inpho/Lorraine O’Sullivan

The drinks industry engaged in a sustained effort to dissuade the Coalition from banning the sponsorship of major sporting events by drink companies, official records show.

Documents released under the Freedom of Information Act show the industry’s lobbying campaign went to the top level of the Government. It featured global and national business figures, and interventions with Ministers were made at sensitive points in the debate.

The Coalition ultimately decided not to proceed with a sponsorship ban, but not before a battle between Minister of State for Health Alex White, who championed the proposal, and key Fine Gael Ministers.

Chief among the opponents was Minister for Sport Leo Varadkar, who successfully argued that there should be no ban without alternative funding for sports bodies to replace income foregone from sponsorship. Mr Varadkar had further concern that banning sponsorship could damage Ireland’s aspirations to host the Rugby World Cup in 2023.

The Government settled a new alcohol policy last October. The centrepiece is minimum pricing, which may yet run foul of European competition law.

Instead of banning sponsorship, the question was farmed out to an official working group for further scrutiny. Ministers told this group, which is but the latest in a line of official bodies to examine the matter, to report back within a year.

After prolonged conflict and haggling within the Coalition, any early resumption of moves to ban sponsorship is now considered unlikely.

While drink companies and sporting bodies never made any secret of their disdain for any sponsorship ban, the FoI records point to a concerted push by a well-resourced and well-informed industry to bring its concerns directly into the heart of Government.

The documents further show that one drinks industry figure claimed insight into a core aspect of a Government memorandum circulated to line departments for observations. Such memos are supposed to be confidential – and this was before the Cabinet had discussed the memo.

The Irish Times has separately established that the then chief of Diageo (which owns Guinness), Paul Walsh, expressed concern about the sponsorship question with Mr Kenny at the World Economic Forum one year ago in Davos, Switzerland.

At the time, Mr Walsh was one of the world’s most powerful executives in the drinks industry. He raised the matter again with the Taoiseach in a letter following their meeting. His anxieties about the mooted ban were later relayed to other Government figures, it is understood.

The records were released by the Department of Arts, Heritage and the Gaeltacht. Minister for Arts Jimmy Deenihan had a direct political interest in the debate as a sponsorship ban, depending on how it was framed, might have cut off drinks industry support for certain arts events and festivals. This includes high-profile events such as the Jameson Dublin International Film Festival and Cork Guinness Jazz Festival.

Still, access to internal records on the Government’s deliberations was refused both by Mr Deenihan’s department and by Mr Varadkar’s department.

Urgent correspondence
The question of banning alcohol sponsorship has been under discussion for years, and, in 2009, the then government decided to include alcohol in the remit of a separate steering group on substance misuse.

The steering group’s report, released in February 2012, said “drinks industry sponsorship of sport and other large public events in Ireland should be phased out through legislation by 2016”.

It also said there should be no increase in sponorship in the intervening time.

The first was a letter to Mr Deenihan on January 27th, 2012, from Fionnuala Sheehan, chief of Mature Enjoyment of Alcohol in Society, an industry group whose declared aim is to promote “sensible” drinking.

Ms Sheehan was up to date on the internal Government discussion. “I learned yesterday that Minister for Health, Deputy James Reilly, recently sent a report from the National Substance Misuse Steering Group to your Department for observations, prior to the matter being brought to Cabinet for a collective Government decision on its contents,” she wrote.

“As chief executive of MEAS/drinkaware.ie, I am extremely concerned to learn that the report circulated may, in fact, be the Majority Report only, and that a critical Minority Report submitted by MEAS to the chairman of the working group, Dr Tony Holohan, on 18 November, 2011, has not been included in the memo circulated to Government Departments for observations.”

The second correspondence went to Con Haugh, then secretary general of Mr Deenihan’s department, from Kathryn D’Arcy, director of the Alcohol Beverage Federation of Ireland, a division of business lobby IBEC. An email from Ms D’Arcy was sent on February 6th, 2012, the day before the press conference at which the steering group’s report was published.

Like Ms Sheehan, Ms D’Arcy was displeased at the “exclusion” of a separate minority report from her own group. In her email to Mr Haugh she made it clear that she had raised the matter at a political level too: “Please note that I have also asked the Minister’s private secretary to bring this to the Minister’s attention.”

Aspects of the steering group’s report had already run into resistance within Government. An official’s note on the press conference of February 7th, 2012, said “mention was made of the recent press reports stating that four Ministers had objected to or had problems with the report, questioning the actual Government support for the report”.

By this time, the lobbying campaign by the drinks industry was already well under way.

The FoI documents include a letter to Mr Deenihan in September 2011 from yet another body, the Drinks Industry Group of Ireland. Its chairman, Kieran Tobin, enclosed a report on the contribution of the industry to tourism, festivals and sport by Dublin City University academic Anthony Foley.

“In these tough economic times, it is difficult to envisage who would have the commitment, the track-record, and the means to fill the void should further restrictions be placed on drinks industry sponsorship,” wrote Mr Tobin.

Sent forward
It was not until the middle of 2013 that the sponsorship question was sent forward for a Government decision. Mr White circulated a memo to Cabinet in late May in which he said a ban should be limited to major sporting events and should not apply to local sporting or arts and cultural events. The proposal was for a ban from 2020, with new contracts outlawed from 2016.

When news reports about the memo inevitably emerged in early June it soon became clear that Mr Varadkar was resisting a ban and the pinpointing of a date by which it would take effort.

Another push from the drinks industry and business interests soon followed. In the days after news broke of Mr White’s memo, Mr Deenihan received a letter from Chambers Ireland, the largest business organisation in the State. Chambers Ireland chief Ian Talbot said a sponsorship ban would be misguided. He cited the value to the economy of the alcohol sector and said there was no evidence such a move would benefit public health.

The next wave of correspondence went higher still. Anna Malmhake, chief of Irish Distillers, wrote in her capacity as chair of the Alcohol Beverage Federation to Mr Kenny in July.

“It should be noted that the British government did not consider the introduction of bans on sponsorship and certain advertising, which had been called for by some groups, on the basis of a complete lack of evidence as to their effectiveness,” she wrote.

Ms D’Arcy copied this letter to Mr Deenihan’s private secretary and said in a note that the correspondence had also gone to Mr Gilmore, Mr Noonan, Mr Varadkar, Minister for Jobs Richard Bruton and Minister for Agriculture Simon Coveney.

It follows that the Government would have been in no doubt about the industry’s concerns when decision time came.