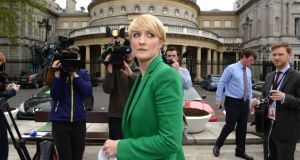 When the Fianna Fáil empire struck back against Senator Averil Power’s audacious departure from the party, it had to be extremely careful about the optics. The sound of a male-dominated parliamentary party coming down hard on an isolated and unhappy young woman over the tone and timing of her announcement would not have played well on the airwaves.

Hence the mobilisation of women councillors to fight the party’s corner on radio, following leader Micheál Martin’s declining of RTÉ’s offer that he “mix it” with Ms Power. In normal circumstances, the loss of a Senator would not be a disaster for a party, but Fianna Fáil has no women TDs and in the next election all parties must ensure 30 per cent of their candidates are women, or face having valuable State funding cut in half.

Power did not play the gender card when she announced she had lost faith in her former party, although she said the strategy she was asked to develop on improving female participation in Fianna Fáil had been “largely ignored”. She majored on her dissatisfaction with Fianna Fáil’s “cynical and cowardly” approach to the same-sex marriage referendum.

Her departure leaves the Fianna Fáil parliamentary party with veteran Senator Mary White the “last woman standing”, as she was described by one of the crowd that accompanied Carlow-Kilkenny byelection winner Bobby Aylward back to Leinster House on Tuesday.

A lack of female Oireachtas members is not a problem unique to Fianna Fáil. Observers would not have needed the fingers of both hands to count the number of women TDs in the Dáil chamber when Aylward was reintroduced yesterday. Some women who have served in Leinster House for many years have stressed their belief about politics being a long game. They observed that the timing of Power’s announcement, some 36 hours after Fianna Fáil’s byelection success, was designed to wound.

And they noted her script, with its cutting reference to Martin as a “leader without any followers”, was crafted to inflict maximum damage.

But she was staunchly defended by others, including her Trinity College Dublin contemporary Lucinda Creighton, who forfeited both her ministerial office and Fine Gael parliamentary party membership after voting against the Government in an abortion legislation debate in 2013.

“I’m sorry for Averil . . . I think she’s given obviously all of her adult life to the party. I was in Young Fine Gael in Trinity when she was in Ógra Fianna Fáil,” Creighton said. “I don’t think either of us imagined that 12 years later, or whatever it is, that we’d both be gone from our respective parties.

“Unfortunately,” Creighton added, “the old dynastic political parties just don’t have space for anybody who challenges the consensus or for people who have passion and conviction, because they’re so uniform in their thinking.”

Gardaí suspect botched murder attempt was bid to avenge Mulready-Woods death 11:56
Election 2020: ‘We all think the health service is a lost cause’ 11:55
Churches urge faithful to exert pressure on politicians over housing 11:53
GRA says lack of resources will leave gardaí ‘without armed backup’ 11:49
Clothing and footwear seized in Cameron Blair murder inquiry 11:08
SUBSCRIBER ONLY