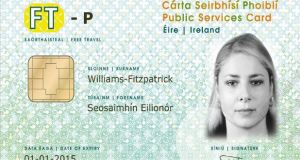 The Public Services Card: The Department of Social Protection said it might be necessary and appropriate for the matter to be referred to the courts for a definitive decision.

There is a “strong legal basis” for the continued use of the controversial Public Services Card (PSC) and it would be “potentially unlawful” to withdraw it, a Cabinet meeting was told on Tuesday evening.

Last month, the State’s data watchdog found the use of the card, issued to more than three million citizens, had no basis in law for many Government services. The Data Protection Commission, which is headed by commissioner Helen Dixon, also ordered that Government departments and agencies delete the data on citizens which was not related to welfare services.

In a joint memo, Minister for Social Protection Regina Doherty and Minister for Public Expenditure Paschal Donohoe told the Cabinet that the Government was challenging those findings. The meeting also heard the matter may end up before the courts.

Ministers were told it would be “inappropriate and potentially unlawful” to withdraw or modify the use of the PSC.

A spokesman for the Government said the commissioner’s report would be published “in the near future”.

The Department of Social Protection will now write to the Data Protection Commission (DPC) to inform it of the decision to challenge the findings and will seek a meeting to discuss the developments.

In a statement issued on Wednesday night, the Department of Social Protection said “following very careful consideration of the report and having taken the advice of the Attorney General’s Office, the Ministers informed Government that they are satisfied that the processing of personal data related to the PSC does, in fact, have a strong legal basis, the retention of data is lawful and that the information provided to users does satisfy the requirements of transparency”.

“Accordingly, it is intended, in line with decisions of successive governments dating back to 1998, to continue to operate the PSC and the Safe 2 identity authentication process on which it is based.”

The department said it might be necessary and appropriate for the matter to be referred to the courts for a definitive decision.

Ms Doherty said her department, in conjunction with the Attorney General, had given “very careful consideration to the DPC’s findings, and while we respect the office and the good work it does, in this instance, based on strong legal advice, we cannot agree with the findings”.

It comes after a group of international privacy experts criticised the Government’s decision to appeal Ms Dixon’s findings.

Elizabeth Farries of the Irish Council for Civil Liberties (ICCL) said it was a “worrying and possibly unprecedented scenario where a statutory body has conducted a two-year investigation on the public’s behalf and the Government is not only hiding that report from public view, but now it seems it intends to spend public money to challenge its findings”.

Daniel Kahn Gillmor of American Civil Liberties Union (ACLU) said, “It is very troubling that the Irish Government would consider undermining that office as the commission works to defend the rights of people subject to its oversight.”

Separately at the Cabinet meeting, the Minister for Agriculture Michael Creed gave a briefing on the beef price impasse. He told Ministers of the “deep-felt anger and frustration presently being felt among beef farmers”.

He described efforts being made publicly and privately with all stakeholders to try to break the current impasse, and said the issue “would not be solved in the High Court or on the picket line” and the talks table was the only place to progress farmers’ concerns.