Inside Politics: How Fine Gael and Labour handle jitters over abortion legislation and the economy will indicate a lot about the Government’s prospects 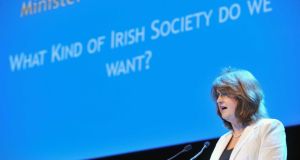 Minister for Social Protection Joan Burton giving a speech last weekend in which she said we have “reached the limits of austerity now”. Photograph: Laura Hutton/Photocall Ireland

The outbreak of political posturing by elements in both Coalition parties over the past week is a worrying signal that after two years in office nerves are beginning to fray under the pressure.

On the big issues of the economy and abortion there are obvious tensions between the Coalition parties but there are also serious divisions within each of them that could pose an even bigger threat to the Government’s long term viability.

On the core issue of the economy there is a predictable difference of emphasis between the parties, with some unnamed Fine Gael Minister unwisely talking up the prospect of tax concessions for middle- income earners next year and Labour figures calling instead for tax increases on higher earners. While it is understandable that those in Government would like to focus the attention of taxpayers on the light at the end of the tunnel, talking up the prospect of tax concessions at this stage is extremely foolish.

It will inevitably lead to disappointment on the part of voters when next year’s budget is unveiled in October but, more dangerously, it threatens to sap the national will to sort out the mess in the public finances by 2015.

People need to be reminded again and again that revenue and expenditure are still away out of line with State borrowing running at more than €1 billion a month to maintain public service pay and welfare at their current levels.

Minister for Social Protection Joan Burton didn’t help with a speech last weekend in which she said: “I believe that we have reached the limits of austerity now.” That conveyed the impression that her Cabinet colleagues were wedded to “austerity” for its own sake and that budget discipline could be abandoned without any consequences.


Capitulation
Even the use of the term “austerity” to describe current policies was a capitulation to the arguments of Sinn Féin and the hard left and right-wing elements in the Dáil who claim there is some easy alternative waiting to be plucked from the air.

Minister for Public Expenditure Brendan Howlin confronted the issue head on when he outlined the Government’s response to the rejection of the latest Croke Park deal. “Austerity is a nice phrase to hang your hat on. Let’s deal with that one. I for one am not a ‘believer’ in austerity. I believe a more coherent anti-austerity strategy across Europe would be good for Ireland and for Europe . . . But I am not a dreamer either. I have been in politics long enough to know the damage done to a small country like ours by not being able to pay your way.”

Howlin made the pertinent point that by any definition this country is pursuing anti-austerity policies. “We continue to run sizeable budget deficits each year despite our large debt burden. The size of the budget deficit is being reduced in a steady and rational fashion. The Government has already added a further year to that timetable. But the idea that we can push that debt burden higher on a permanent basis simply defies reason.”

Howlin has stuck by the target of reducing the public service pay by €1 billion by 2015, despite the rejection of the Croke Park II, but delivering on that commitment will test the resolve of the Government and the public in the face of industrial action by public servants.

There are also likely to be serious difficulties on the political front as some Labour TDs will inevitably find it difficult to vote in favour of imposing pay cuts when the issue comes before the Dáil.

On the Fine Gael side of the Coalition abortion is the issue that threatens to split the party and, regardless of the political consequences, Enda Kenny will have to demonstrate the kind of resolve that Howlin is showing on public pay. Kenny’s task was made more difficult by a series of leaks from Labour sources suggesting that legislation being drafted by Minister for Health James Reilly would establish teams of doctors to interrogate pregnant women who threaten to take their own lives.

There is clearly some dispute over the kind of procedures that will be put in place but ever since the publication of the expert group report on abortion it was always going to be the case that any initial decision on a suicide threat would be made by a three-person medical panel with the right of appeal after that.

Kenny has to contend with a vocal rump in his parliamentary party which is opposed to the issue of suicide being included in the legislation at all. The problem is that it cannot be avoided given the Supreme Court decision in the X case.


Restrictive
The Fine Gael leadership is clearly trying to keep legislation on the suicide option as tight as possible in an effort to persuade reluctant backbenchers to go along but, one way or another, it will be very restrictive by international standards.

Fine Gael could well lose a few backbenchers on the abortion issue given the scale of the opposition expressed at the parliamentary party meeting on Wednesday. The big talking point in the party is whether Minister of State for European Affairs Lucinda Creighton, who has expressed strong opposition to the inclusion of the suicide option, will join the rebels when it comes to a Dáil vote.

Both parties in government can afford to lose a few TDs but Labour appears to have the bigger problem. Party TDs who defy the whip on the pay issue might be tempted to join some of their former colleagues on the dissenting benches and stay there. By contrast, Fine Gael TDs who go overboard on abortion are likely to return to the safety of the party by the time of the next election.

How both parties handle the jitters over the next two months will tell a lot about the capacity of the Coalition to see out its term.