Postmasters to protest against potential closures

Minister says future not as bad as suggested despite claim 1,100 offices are loss-making 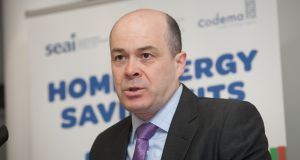 Minister for Communications Denis Naughten said An Post’s plan would be presented to a board in four to six weeks, and then to Government. Photograph: Gareth Chaney Collins

Minister for Communications Denis Naughten insists the future of An Post is “not as negative” as some reports “have suggested”as postmasters plan to protest against proposed closures next Tuesday.

An Post chief executive David McRedmond told the Government this week more than half of all the 1,100 post offices in the State are loss-making.

Businessman Bobby Kerr had been tasked with producing a report on the future of the network with the aim of curbing losses estimated to be between €12 million and €15 million a year.

The report, which has not been published yet, is understood to have recommended the closure of 80 post offices.

However, the latest statement from Mr McRedmond has raised the possibility that many more could be closed.

An Post, along with consultants McKinsey, are creating another plan, in which the closure of a large number of post offices and redundancies are expected.

Mr Naughten, who has responsibility for corporate oversight of the company, said he had not seen the proposals An Post are working on yet.

The Minister said the strategic plan would be presented to a board in four to six weeks, and then to Government.

“There is a challenge in An Post and everyone is conscious of that,” he said. “What surprised me was the scale and the seriousness and the immediacy of the problem that was bought to my attention at the beginning of November.”

Mr Naughten said he then implemented a short-term action plan, which included the introduction the legislation enabling a price rise for stamps from 72 cent to €1, which was passed in the Oireachtas this week.

Mr Naughten told The Irish Times he understood the fears from communities in rural areas over the possible loss of the post offices.

“I represent the most rural constituency in the country so I’m very conscious of this issue. My godmother is a postmistress so I know the issues from both sides, both – from a community point of view– and the postmasters’ point of view.”

Mr Naughten said there would be opportunities to sustain the postal network in the long term,

“I don’t think it is a negative as some of the reports that have been put out there over recent years have suggested,” he said.

Mr Naughten said he was confident all parties, including An Post and the postmasters, could reach a compromise.

“Let hope that we can get everyone to meet halfway,” he said.

However, on Thursday, The Irish Postmasters’ Union announced they would hold a protest outside the GPO in Dublin next Tuesday at 11am.

Union general secretary Ned O’Hara said the union was opposed to the approach being taken by An Post and would resist any closures driven by the company.

He said the postmasters had signed up to the plan chaired by Mr Kerr and wanted the report published and implemented.

Mr O’Hara said the report was completed before Christmas and included a Government investment of €56 million.

“Bobby Kerr has already drawn all of the information and views together and, while postmasters do not agree with all of the contents, we believe it offers a workable solution for the network,” he said.

“We have already negotiated on each issue.

“An Post should not be allowed to now ignore this work and do a solo run on the future of the network and the fate of rural communities, while focusing on its commercial targets.

“Postmasters are calling on Communications Minister Denis Naughten and the Government to intervene immediately.”