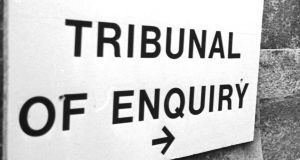 1. The Fennelly Commission: It was established in March 2014. The commission was set up to investigate the taping of phone calls at garda stations and circumstances around the retirement of former garda commissioner Martin Callinan. The chair of the commission is Mr Justice Niall Fennelly. It was expected to be completed by the end of 2014 and now is due to be finished in March 2017.

2. The MacLochlainn Commission of Investigation: It was established in August 2014. The commission was set up to examine the fatal shooting of Mr Ronan MacLochlainn by members of the Garda Síochána in the course of an attempted armed robbery of a Securicor van in Co Wicklow in May 1998. The chair is Mary Rose Gearty SC. The expected date of completion date was February 2015 but has been delayed due to High Court proceedings.

3. The Mother and Baby Homes Commission of Investigation: The commission was established in January 2015 and is chaired by Judge Yvonne Murphy.

It was set up to examine the deaths of babies that happened at 14 mother and baby homes and four county homes between 1922-1998. The expected completion date of completion is February 2018.

4. Commission of Investigation into Irish Bank Resolution Corporation (IBRC): Also known as the Siteserv inquiry. The commission was set up in June 2015 and is chaired by Judge Brian Cregan. Its purpose is to examine transactions involving IBRC, which includes the sale of Sitserv to Denis O’Brien Millington. The expected completion date is the end of 2017.

5-9. Five Inquiries into Garda Misconduct or Inadequate Garda Investigations: It was recommended to be established in July 2016 and the chair is unknown. The inquiry was recommended by theIndependent Review Mechanism to examine 320 complaints from members of the public about garda misconduct and inadequate garda investigations. The Minister for Justice Frances Fitzgerald has accepted the recommendation and the completion date is unknown.

10. Olympic Ticketing Inquiry: This is a non-statutory inquiry and the chair is Judge Carroll Moran. It was set up in September 2016 to examine ticket touting allegations after former Olympic Council of Ireland president Pat Hickey’s arrest in Rio. It will examine the OCI’s ’s handling of the ticket allocation and accreditation at the Rio Olympics, the 2014 Winter Games in Sochi, Russia and the 2012 London Olympics. The expected completion date is April 2017.

11. The Disclosure Tribunal: It was established in February 2017 and is chaired by Supreme Court judge Mr Justice Peter Charleton. The tribunal was set up to examine alleged Garda malpractice around whistleblower Sgt Maurice McCabe. The expected completion date is unknown.

12. Commission of Investigation into ‘Grace’ Foster Home: The commission was established this week (March 7th) and the chair is Marjorie Farrelly SC. It was set up to investigate the alleged physical and sexual abuse of an intellectually disabled young woman who spent 20 years at a foster home. An interim report is expected in six months and a completion date of March 2018.

Inquiries that are expected to be established

13. Possible inquiry into the sale of Nama’s Project Eagle loan portfolio with a completion date of the end of 2017.