Postmasters may stand own candidates in general election 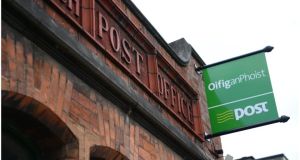 Postmasters are to vote on running their own political candidates in the next general election.

In advance of an address by Minister for Communications Alex White at the postmasters’ annual conference in Kilkenny this weekend, members have tabled a debate on standing their own people to oppose candidates from Government parties.

The union says its priority is to protect the post office network and support local communities which have been beset by closures and commercial competition from out-of-town shopping centres.

Irish Postmasters’ Union general secretary Ned O’Hara said there was a lot of frustration among members at what was seen as a lack of Government action to support post offices.

He said out-of-town shopping centres, concentrated at larger urban centres, were taking the heart out of local communities.

In towns and villages particularly in more rural areas, the closure of the local post office is preceded or followed by the closure of a Garda station, the local health centre, small shops, national schools and other services. According to the union, such closures are making living in such communities extremely difficult.

“The Irish Postmasters’ Union has never met a TD or community group who wants a future like this, yet little action is being taken by Government to represent what communities want,” he said.

Mr O’Hara said post office candidates were already keen to run for election and would be seeking the backing of their colleagues.

The union is using the annual conference to call on the public to switch from receiving Social Protection payments by electronic funds transfer to collecting payments at post offices.

About half of Social Protection payments are currently paid by EFT and half at post offices.

The Government aims to have 97 per cent of payments made by electronic method by the end of 2018.

A report from consultants Grant Thornton last year concluded that hundreds of post offices would close in coming years, mainly due to the change in the delivery of Social Protection payments to electronic methods.

He instanced hospital charges, insurance quotations and pension savings as areas where there was scope for widened post office activity with encouragement from Government.

Their role is to support the recommendations of the Commission for the Economic Development of Rural Areas, which examined the potential for economic development in rural Ireland between now and 2025.