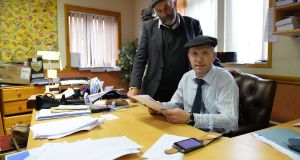 Danny and Michael Healy-Rae: Having built roads in south Kerry, voters will now expect the Healy Raes to repeat the trick in the north of the county. Photograph: Domnick Walsh

The Healy-Raes, like the conquering Romans, know the value of a road. The R569 that sweeps majestically from Loo bridge, on the main Cork-Killarney road is one of the best roads in Kerry. Blessed with a good surface, fencing and a lack of potholes after a bad winter, it is, perhaps, one of the best in the south-west. The main N22 nearby is, by comparison, a poor relation.

Regional roads are Kerry County Council’s under the funding remits. There are two Healy-Raes on the council. This is unlikely to change. Now elected to the Dail, Danny Healy-Rae, alongside his brother Michael, will most likely be replaced by another member of the family, most likely Danny’s daughter, Maura, who teaches in Bandon.

Last Sunday morning, Maura one of Danny’s six children, played a small accordion as the family danced the opening moves of a Kerry set in the sports hall in Killarney when Danny – in his open neck shirt – was elected. The family had tried putting a tie on him, but they failed. “They are all mad into music and dancing,” says a neighbour, speaking in the Village Grill in Kilgarvan, still just a little sleepy after Sunday’s celebrations.

The milk collection lorry winds through the village. Otherwise the only movement comes from a black and white collie crossing the street. Slowly. The main street in Kilgarvan, as the Tidy Towns Report puts it, “unfolds itself by degrees”.

The Healy Raes’ pub stands at one corner, Danny’s family home. It was founded by his father, Jackie, and it was where he was laid out after his death. Father and son were extremely close, locals crediting the son with the same natural wit and keen intelligence as his father. Locals are genuinely fond of him.

A local housing estate is named after the family. The cap-wearing Michael, cuter, more polished in the eyes of his neighbours, is headquartered at the Kenmare end of the village. His wife Eileen, runs the Mace shop and post office.

Leaving the village for Kenmare, there is a slán abhaile from a life-size effigy of the late Jackie on top of advertising hoardings for the shop and post office. A van emblazoned with “Vote No1 for the Healy-Raes” is parked alongside.

Kilgarvan has produced political figures before. The American trade unionist Mike Quill, founder of the Transport Workers Union and communist ally, was born there in 1905. A local centre is named after him. Just outside Kilgarvan at Morley’s Bridge, there is a monument to Michael Lehane, who fought on the Republican side in the Spanish Civil War before dying in 1943 serving with the exiled Norwegian navy as it continued the fight aganist Nazi Germany.

In 1997 on a rainy mid-May Sunday, the Norwegian ambassador and some of Lehane’s ageing comrades came to honour him. Then tánaiste Dick Spring was centre-stage.

From under his umbrella, the urbane Traleeman joked to Jackie that he would be the next TD for Kerry South. A month later, against all expectations, and after breaking with Fianna Fáil, he won.

The Kilgarvan locals support their own. Michael won 235 of the 364 votes in Booth Number I in Kilgarvan National School. Forty four chose Danny. In the village’s second polling box Michael got 219 of the 381, while Danny won 75.

Fianna Fáil treated the Healy-Raes foolishly, believes Barry Marrinan in the Village Grill. “They did not take Jackie seriously enough. They did not appreciate that someone who laughed a lot, schemed, had a colourful wit, was a bit loud and, let’s face it, agricultural-looking might also be clever. Anyone who thinks they are buffoons are wrong,” he says.

Kilgarvan on the southern side of Mangerton Mountain is where the battle of Callan was fought. It is the Gaelic south, a place where the Normans never got a hold.

Now, there is some concern locally that the Healy-Raes will find north Kerry people different. They are more like Limerick people, with the same sayings and language, locals believe. South Kerry folk are more akin to Cork people “with the English just a skin stretch over a rich vein of Irish”. However, the talk quickly turns from philology to percolation tests – or septic tanks.

Planners’ objections to rural bungalows are despised. One local “up near the Top of Coom” has had to carry out percolation tests for six years. Each test costs €2,000.

“Local authorities were polluting whole bays because they had no sewerage treatment. This man was miles from the middle of nowhere on his own land. The blackguarding of rural people is frightening,” he says. Others quickly agree.

Having built roads in south Kerry, voters will now expect the Healy Raes to repeat the trick in the north of the county.

Michael pushed the issue strongly in his appeal to voters in Tralee, Listowel and elsewhere. Two days after his election, his first press release demanded action, saying the roads are in “a disgraceful condition”.