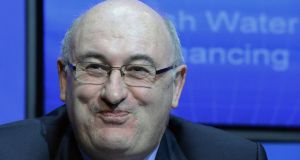 Plans for a directly elected mayor of Dublin are to be resuscitated following talks between Minister for the Environment Phil Hogan and mayors of the four Dublin local authorities. Photograph: Cyril Byrne/The Irish Times.

Plans for a directly elected mayor of Dublin are to be resuscitated following talks between Minister for the Environment Phil Hogan and the mayors of the four Dublin local authorities.

However it is likely to be two years before proposals for the new office are put to a public vote.

The creation of a mayor for the Dublin region, which would be elected by the residents of Dublin city and county, was vetoed earlier this year by Fingal county councillors.

The three other Dublin councils - Dublin City, Dún Laoghaire-Rathdown, and South Dublin - were overwhelmingly in favour of the proposal.

Mr Hogan said he held the meeting this morning at the request of the mayors and a “frank exchange of views” took place.

“If the Dublin authorities are serious about this they must give close consideration as to how they will provide for the governance of the metropolitan area as a whole and not just focus on the position of the directly elected mayor,” he said.

“The citizens of Dublin are central to all of this and the local authorities must examine how they might engage them in the debate in what would be best for Dublin.”

Establishing a directly elected mayor had been the subject of a number of unsuccessful attempts by previous Governments, he said.

“I’m not saying we need to reinvent the wheel here. The previous process was a good start but the four Dublin authorities must build on this and improve matters somewhat. Whatever comes out of this process must be substantial, realistic, and the functions and the cost and all other implications must be examined closely ,”

Mr Hogan has asked the mayors to return with proposals by October 31st. Lord Mayor of Dublin Christy Burke said the new proposals must make it clear that the mayor would represent all of the Dublin region.

“Nobody must be excluded, or feel excluded, and the issues that stopped people supporting the proposal in the past need to be properly addressed and debated,” he said.

Mr Burke said he would be working on proposals with the other mayors - Fintan Warfield of South Dublin, Mags Murray of Fingal and Marie Baker of Dún Laoghaire-Rathdown - but he said Mr Hogan had indicated it would not be a quick process.

“From our discussions this morning it was indicated that there was at least two years work in this before it comes back before the people,” Mr Burke said.