How much is the carbon tax going to cost me?

Q&A: Petrol, diesel and household fuels all fall under the tax, which is on the rise 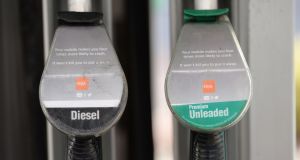 What is the carbon tax all about?

Well, it’s been around for several years so you might have missed it, but you’ve probably been paying it. Introduced in 2010, the tax is intended to reduce carbon dioxide emissions and is part of the State’s strategy to support a greener and cleaner environment.

So how much does it cost?

The charge has been set at €20 per tonne of Carbon dioxide (CO2) emitted by certain designated fuels. In Budget 2020, this was raised to €26 on petrol and diesel but its application on heating fuels was delayed until May next year. The intention is for it to to hit €80 by 2030.

I’ve never bought a tonne of carbon in my life. Wouldn’t know where to put it. How is the tax applied to things I actually buy?

Well, if you burn oil, gas, coal or peat to keep warm your home, then you’re on the hook. Every euro rise in carbon tax per tonne announced by the Government translates into €2.51 per 900-litre refill of kerosene (home heating oil).

It adds €2.30 on to the average annual household gas bill (based on average consumption of 11,000 kWh per year). For those still burning solid fuels, every euro of carbon tax adds 2.6 cent to a 12.5kg bale of peat briquettes or 12 cent to a 40kg bag of coal.

So what will it mean when the rates hit €80?

Back to the cars, who starts paying the new charge this morning, and what does it all mean for the motorist?

As of midnight on Tuesday, petrol went up by 1.7 cent per litre and diesel by 2 cent on the back of the €6 budget increase in the carbon tax.

Well, in motoring terms, it means heavier users pay the most carbon tax. That may sound fair but consider the wider implications of our housing crisis, which has pushed lower earning families further and further from their places of work. Many of these families, and those living in rural areas who travel longer distances in their daily lives, can’t afford to spend thousands on newer, cleaner cars and don’t have a choice of public transport options. So they are likely to do the biggest mileage and drive the oldest, most polluting cars. These are the people who will be hit hardest by a carbon tax on petrol and diesel prices.

Can’t they just opt for an electric car?

Not without a major drop in new car prices. Speaking to The Irish Times earlier this year, Denis Murphy, chief executive of Blackwater Motors said: “Unfortunately the cheapest, most popular electric cars at the moment have a retail price of approximately €50,000. You get a €10,000 grant and tax rebate, which brings them to €40,000. The average price of a new car that’s bought in the Republic is around €20,000 and the average price of a car in the Irish market, including imports and used cars, is €15,000. So we are way off the affordability threshold for these cars as yet.”

There’s also the issue of supply. Every national market is demanding new electric cars and the manufacturers simply can’t roll them off the production lines quick enough at present.

A little. The total assistance for somebody opting for an electric vehicle is €10,000 – plus zero per cent BIK if you have an electric company car – but if the electric car is still €30,000-plus and you have €15,000 to spend then you are stumped. Even the idea of a scrappage scheme would seem a little pointless unless the amount offered could be brought closer to the cost of a new car. The most recent Irish scrappage scheme, for example, offered just €1,500 for the used vehicle.

The same applies to home heating costs. The poorest families have difficulty in keeping pace with the latest developments in technology. Again the retrofit grants help, but they have struggled to keep up with demand to date.