Paisley was contradictory and complex man driven by ‘outsider’ factor 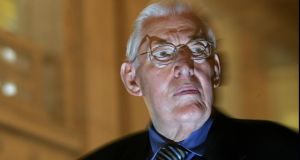 On the morning of August 9th, 1971, I met the Unionist MP for Shankill, Des Boal, on Royal Avenue in Belfast (I was then working for the Irish Press group in Northern Ireland). We went around to the Buster McShane gym near City Hall, where Boal had arranged to meet Ian Paisley.

The relationship between Boal and Paisley was perplexing. They did not seem to share religious beliefs; their lifestyles were very different; and, it seemed to me, they shared little politically.

Previously this had not been so, for Paisley was instrumental in Boal’s election to the Stormont parliament in 1960 and Boal had been involved with the Ulster Protestant Action Movement in the early 1960s.

The threat of internment had been around for a few months before August 9th, 1971, and Boal had told me he would condemn it on civil libertarian grounds if it were introduced. He agreed that morning to give me the statement he had promised. Not just that, he persuaded Paisley to join him in the condemnation.

Paisley spent some of the next year trying to wriggle out of what seemed like a “concession” to “terrorism”.

I bumped into Boal early one evening late in 1971 in the Europa Hotel where he stayed occasionally – he lived at the time in Ardglass, which was quite a distance from Belfast.

He was about to travel with Paisley to Enniskillen to launch jointly a new political entity, the Democratic Unionist Party. Paisley had founded the Protestant Unionist Party in 1966 and had wished to retain the “Protestant” appellation in the new party, but Boal would not have it and Paisley went along with that.

At that meeting Boal persuaded Paisley to issue a statement to us, offering the prospect of some kind of constitutional association between Northern Ireland and the Republic – he did so on tape for Liam Hourican. The statement was broadcast on RTÉ radio and published in The Irish Times and The Irish Press.

Again, Paisley spent a lot of time afterwards trying to unwind himself from that commitment.

I got to know Paisley a bit through Des Boal at that time and was fascinated by what I perceived – perhaps wrongly – as the apparent brittleness of his political convictions.

I came to suspect that what drove him was something quite different and, as this involves an assessment of another person’s motivations, I offer this insight tentatively.

It is the “outsider” factor.

Paisley had been an “outsider” as a Presbyterian preacher and was driven to found his own Protestant denomination.

He was a political “outsider”, scorned by the aristocrats and merchant princes of the unionist establishment. He seemed driven by a compulsion to triumph over these establishments and he certainly did.

The manner of his doing so was brutal, reckless and savage. He heaped poison into the well of sectarianism and stirred the murderous compulsions of loyalist paramilitaries.

The southern state did its part in confirming Protestant fears of Roman Catholic dominance and then in the early- and mid-1960s ignored the ticking time-bomb of nationalist alienation caused by discrimination, gerrymandering and the rest.

A TV documentary by the Radharc team on discrimination in Derry was not broadcast by RTÉ in 1964, following pressure from then taoiseach Seán Lemass, who feared focus on nationalist “grievances” would interfere with the promotion of good relations between the Dublin and Belfast governments.

The media did its bit by ignoring injustices endemic to the northern state, focusing on the “good news” of rapprochement at official level.

None of that, of course, excuses the horrors perpetuated during the “Troubles”.

Just two other memories of Ian Paisley. I recall talking to him about religious belief and, incidentally, I have no doubt about the sincerity of his religious convictions.

I told him of how my own Catholic upbringing had been very religious and how my mother had insisted on the rosary every night and had been a daily Mass-goer. He slightly misunderstood me, thinking I was ridiculing that background and he thundered: “Do not belittle the faith of your mother.” There was no sectarianism there.

In early 1972 I was charged and convicted of possession of a machine gun in Belfast. I had been shown a device by an IRA member, which he said was a machine gun, manufactured in a loyalist engineering plant. It was, he said, one of thousands to be distributed to loyalist gangs. I contacted the then head of the British army press office, Colin Wallace, and asked whether it was credible that the device could be a workable machine gun.

I said I would enquire.

I got one of these devices from an IRA member in a pub on the Falls Road a few days later and went down towards the Europa with the gun under my jacket, intending to show it to two or three journalists in a hotel bedroom in the hotel. On getting there I was met by RUC officers and arrested and charged.

On the day the case was heard, and after I had been convicted and fined £20, Ian Paisley showed up at the courthouse and told assembled journalists he had no doubt but that I was acting in good faith.

His intervention was vital to me as a journalist working in Belfast then in dispelling suspicions about what I was doing with a machine gun!

It was a generous gesture and not at all untypical of a man, who like many of us, was complex and contradictory.