PAC to recall entire CRC board over pay-offs

Chairman says there are unresoved questions over €740,000 severance package 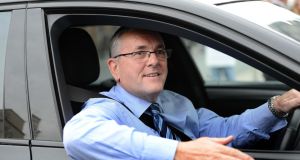 John McGuinness, chairman of the Public Accounts Committee: said that following its public hearings and subsequent media interviews, there was a substantial number of “unsettling questions” surrounding governance, transparency and operations at the CRC. Photograph: Eric Luke/The Irish Times

The Public Accounts Committee wants to recall the entire former board of the Central Remedial Clinic to revisit previous evidence on top-up payments and a €740,000 severance package to its former chief executive, Paul Kiely.

PAC chairman John McGuinness said this was necessary because the evidence was in his view “conflicting, not credible and, in one instance, misleading”.

The Fianna Fáil TD who chairs the public spending watchdog said that following its public hearings and subsequent media interviews with former chairman Hamilton Goulding, there was a substantial number of “unsettling questions” surrounding governance, transparency and operations at the CRC as well as the salary and pension arrangements for Mr Kiely.

Fine Gael TD Simon Harris, also a PAC member, said last night there were 10 questions for Mr Goulding and the former board to answer; he called on them to make all applicable documentation available.

However, Mr Goulding, a son of clinic founder Lady Valerie Goulding, told The Irish Times yesterday that the top-up payments to senior executives and the “uncomfortable” severance payment to Mr Kiely were the only issues and said he was “absolutely confident” that the clinic was run in a correct fashion.

“I have no knowledge of anything wrong being done or anything illegal or greedy or inappropriate.”

Mr McGuinness said yesterday that the committee would be writing to all the former board members, asking them to attend fresh hearings. This comes after the HSE disclosed last week that Mr Kiely’s severance package amounted to some €740,000, despite him telling the PAC last month he was given a lump sum of €200,000. It also emerged that the funding for the package was paid by the Friends and Supporters of the CRC, its fundraising arms.

Referring to Mr Goulding’s disclosure that he was unaware of Mr Kiely’s salary until a year after becoming chair, Mr McGuinness said: “It’s hard to believe a chairman of a board would not know how much the CEO was getting.”

Another issue was the relationship between the CRC, the Friends and Supporters of CRC, as well as the related company CRC Medical Devices. “There are governance issues and it is important that we learn about who knew what among the range of directors sitting on the three entities,” he said.

He also said he had no doubt that Mr Kiely had “misled the committee” about his severance package.

Mr Harris said Mr Goulding needed to answer questions about why the board did not ask Mr Kiely to take a pay cut, how it responded to HSE correspondence on non-compliance and on the manner in which Mr Conlan was recruited as chief executive.

Mr Goulding said yesterday he would provide any documentation he possessed in relation to the CRC. Defending the board’s handling of Mr Kiely’s severance arrangement in a series of interviews over the weekend, he said it had saved the CRC money in the long-term.

“It would have cost €2.1 million to keep him on . . . [the rationale was] if we let him go now, paying this uncomfortable sum, it is a benefit of €1.4 million over the next six years,” he told RTÉ.

Mr Goulding also strongly rejected claims that there had been inappropriate foreign travel or use of credit cards.

In a statement this weekend, the HSE said the administrator it had appointed to oversee the CRC, John Cregan, would also identify any legacy issues on “salary rates and compliance with public pay policy, pension schemes and pension payments”.

Limerick people ‘grossly insulted ’ by Micheál Martin appointments, says Willie O’Dea 13:26
Michelle O’Neill will not step aside ‘under any circumstances’ despite calls from other parties after Storey funeral 13:24
State to pay costs of failed action over Seanad composition 13:16
Dara Calleary given Gaeltacht responsibility after controversy over Cabinet snub 13:09
Call for VAT rate in tourism sector to be slashed to 5 per cent 13:04

1 World, look away now – these are dark days for the United States
2 Health officials ‘very concerned’ about foreign travel, says Donnelly
3 Michelle O’Neill will not step aside ‘under any circumstances’ despite calls from other parties after Storey funeral
4 Bobby Storey: The IRA's planner and enforcer who stayed in the shadows
5 ‘Grossly irresponsible’- Waterford mayor condemns house party of 60 people
Real news has value SUBSCRIBE