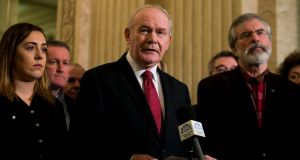 Deputy First Minster Martin McGuinness has said there is an overwhelming desire in the Northern Ireland community for Arlene Foster to step aside. Photograph: Liam McBurney/PA Wire

The new year began in Northern Ireland with renewed calls for DUP leader Arlene Foster to stand aside as First Minister due to the renewable heat incentive scheme controversy.

Sinn Féin Deputy First Minister Martin McGuinness, in a New Year’s Day message, kept pressure on Ms Foster by repeating his demand that she stand aside pending a “preliminary” inquiry into the so-called cash-for-ash scheme.

The DUP appeared to hope that the row over the scheme, which could result in an overspend of more than £400 million (€470 million) over the next 20 years, would temporarily subside during the Christmas holidays. The issue is due to come before the Northern Assembly again when it returns from its recess on January 16th.

However, even over the Christmas period, Sinn Féin and Opposition leaders have been demanding that Ms Foster stand aside. That pressure was prompted by a Sunday World report which said that in January 2013 Ms Foster, while minister for enterprise, wrote to banks urging them to look favourably on those “seeking finance to install renewable technologies”.

The DUP defended the letter, saying that at the time there was a low take-up of the scheme and that its flaws had not yet been recognised.

However, the letter prompted Ulster Unionist Party leader Mike Nesbitt and his SDLP counterpart Colum Eastwood to again call for Ms Foster to stand aside.

Mr McGuinness reiterated those demands on Sunday, saying the North faced a “growing political crisis . . . as public confidence in the political institutions has been grievously undermined by the Renewable Heat Incentive debacle and the DUP’s failure to deal responsibly and adequately with it”.

“In order to address these challenges the DUP and its leader Arlene Foster need to accept there is an overwhelming desire in the community to deal with this issue and for Arlene Foster to step aside as First Minister pending a preliminary report,” added Mr McGuinness.

“That would allow for an independent investigation to take place, which is transparent, robust, time-framed and led by an independent judicial figure from outside this jurisdiction appointed by the Attorney General. A rigorous process to recoup as much of the money as possible must also be put in place.”

A DUP spokesman repeated that Ms Foster had no intention of standing down and was “determined to clear up the mess” of the scheme.

He said the DUP was “happy to have an independent investigation free from any political interference” but added that calls for Ms Foster to stand aside were “just political theatre”.

In his new year message, Mr Eastwood said: “No amount of clever choreography can allow Arlene Foster to remain in office – her one and only option is to step aside and allow a full public inquiry to reach the full truth.”

The UUP peer Lord Empey said the scheme was “without doubt the costliest financial scandal since partition in 1921”.