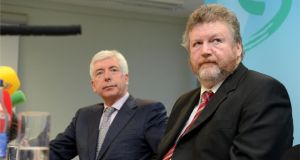 The Government scheduled a special cabinet meeting this morning to settle the abortion legislation amid intensive efforts last night to agree a text acceptable to both Fine Gael and Labour.

The 8am meeting was scheduled after serious drafting difficulties left Ministers without a definitive text to discuss at yesterday’s meeting.

Spokesmen for Fine Gael and Labour insisted the two Coalition parties had reached “political agreement” on the legislation when Minister for Health Dr James Reilly met Minister of State for Primary Care Alex White on Monday.

After 10pm last night however, the draft legislation was still in preparation in the office of the Attorney General.

Final text
“There are still outstanding issues and, until everybody is happy with the draft, we won’t have an outcome,”said a source involved in the discussions.

While a second source said the plan for a meeting this morning remained on track, another said it was not possible to predict whether the legislation would be ready on time.

The fact that the legislation was with the AG’s office last night was seen as a clear sign of progress.

The discussions centre around the scope of a new framework to review the operation of the law, something not included in the heads of the Bill agreed several weeks ago.

‘Reporting mechanism’
The legislation is expected to be broadened to include a “reporting mechanism” so the Oireachtas can monitor its operation. One option is for the publication of annual figures setting out the procedures carried out under the Act.

The Minister for Health is also likely to be given the right to intervene if a problem arises in relation to the operation of the Act. Sources said the Minister would have the power to shut down services provided under the Act if the hospital in question was not implementing the Act within the law.

At the same time they said there was no question of a “sunset clause” to reverse the law if it was deemed to open the way for a large number of abortions.

As anti-abortion campaigners intensify their resistance to the legislation, the Catholic bishops accused the Coalition of misleading the people and said every Irish citizen should be concerned about the law.