Our quirky voting system of PR cannot be rushed

Why does it take so long to count the votes after elections in Ireland? 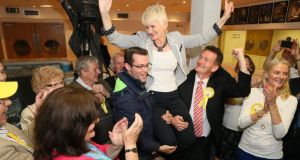 Marathon counts are a staple of Irish elections. The complex process of multiple counts, elimination of candidates and distribution of surpluses demands a methodical approach that takes time.

Exhaustive rechecking and recounting can extend what is already a slow procedure, meaning days can pass before a definite result can be declared.

Long after the rest of Europe had wrapped up, the count in Castlebar to fill the European Parliament seats in the Midlands North West constituency was continuing.

Marian Harkin became the last MEP to be elected at 4am on Thursday when Pat “the Cope” Gallagher conceded that the recheck by bleary-eyed count centre staff would not benefit him.

Electing MEPs for the South constituency involved 12 counts spread over four days in Cork. Fianna Fáil’s Brian Crowley topped the poll with 180,829 votes, and this number of votes had to be counted again because he had attained the quota on the first count and all his votes were then assessed for second preferences.

“They reckon by the time they counted everybody on each count, they handled over one million pieces of paper. It’s hard to see how that could be quick,” said one observer.

In last week’s elections there were two ballot papers – one for the Europeans and one for the local elections – which had to be separated before the counts proper could begin. Some voters misunderstood the process and zig-zagged between the two papers, giving a first preference to an MEP candidate and a number two to a potential councillor.

Our quirky system of proportional representation by means of a single transferable vote (PR-STV) in multi-seat constituencies cannot be rushed. Malta is the only other country that uses PR-STV, which is beloved by many but truly understood by few.

One alternative is electronic voting. Asked if the system might be tried again, a Government spokesman was emphatic. “No with a capital N,” he said.

A pilot scheme in 2002 saw the results in three constituencies announced quickly on the night of the election. Former Fine Gael minister Nora Owen dramatically lost her seat without warning. “I would never want to see it resurrected....I don’t think the Irish people would ever want to go back to electronic voting,” she said.

The e-voting machines were never rolled out nationally due to security concerns and the venture has cost the State €54 million.