Opinion: Commons speech triumph turned to ashes as the war dragged on 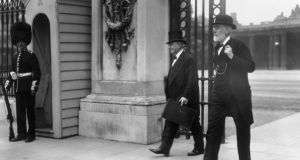 ‘In Britain the danger posed by the Home Rule crisis meant that Asquith’s government didn’t properly focus on the real threat of war until over a month after the heir to the Austrian throne Archduke Franz Ferdinand was assassinated in Sarajevo.’ Above, John Redmond and John Dillon leaving Buckingham Palace after a Home Rule for Ireland Conference in July, 1914. Photograph: Topical Press Agency/Getty Images

Tomorrow it will be 100 years to the day that the leader of Irish nationalism John Redmond effectively committed Ireland to the first World War in a dramatic speech to the House of Commons.

In a classic illustration of the fickleness of political fortune the speech was widely regarded as a political masterstroke. Yet for most of the century that followed the conventional view in Ireland was that Redmond had betrayed his country.

Now that the State is prepared to officially commemorate the Irish men who fought and died in that war, maybe Redmond’s contribution to the creation of an independent and democratic Ireland can properly be acknowledged.

In a plethora of television programmes and newspaper articles that have appeared over the past few months in the build-up to the centenary of the outbreak of war, the importance of the bitter political battle over the future of Ireland that split the United Kingdom has usually been glossed over. By the summer of 1914 the Home Rule crisis threatened not only to bring down the Liberal government led by Herbert Asquith, but to spark civil war in the UK. One of the reasons Germany decided on war was the belief that the UK would be too divided to honour its commitment to France or Belgian.

In Britain the danger posed by the Home Rule crisis meant that Asquith’s government didn’t focus on the threat of war until more than a month after heir to the Austrian throne Archduke Franz Ferdinand was assassinated in Sarajevo. King George V was so worried about the danger of civil war in Ireland and political chaos in the UK that he invited the leaders of Irish nationalism and unionism to a conference in Buckingham Palace on July 21st, 1914, to resolve differences.

Redmond cheered An illustration of how high feelings were running

was when Redmond and deputy leader John Dillon passed Wellington Barracks in Chelsea on their way to Buckingham Palace on July 22nd a number of Irish Guards “enthusiastically cheered them”, according to reports. The guards were subsequently reprimanded publicly by their Colonel who regretted “that soldiers in uniform should give way to a political demonstration.”

Just a few weeks later the guards would fight at Mons in the opening battle of the first World War. At the Buckingham Palace conference world war seemed the farthest thing from anybody’s mind. Instead, those present argued about the possible temporary exclusion of six Ulster counties from Home Rule as if nothing could be more important.

“We sat again for an hour and a half discussing maps and figures and always getting back to that most damnable creation of the perverted ingenuity of man – the County of Tyrone,” recorded Asquith on July 22nd. He went on to say: “I have rarely felt more hopeless in any practical affair: an impasse with unspeakable consequences upon a matter which to English eyes seems inconceivably small and to Irish eyes immeasurably big. Isn’t it a real tragedy.”

When the conference failed and war became inevitable it was greeted as a blessed relief from the intractable problem of Home Rule. “The one bright spot was the settlement of the Irish strife . . . God moves in mysterious ways,” wrote Asquith on August 3rd. It was on that day that British foreign secretary Sir Edward Grey made his famous speech to the Commons committing the UK to France’s aid and Belgian neutrality. Redmond made a dramatic intervention after Grey’s speech to say the government could withdraw all its troops from Ireland and that the Irish and Ulster volunteers would defend the country from invasion. The speech electrified the Commons and Redmond was applauded. Asquith recorded that after Grey’s remarkable speech “Redmond cut in very effectively” while unionist leader Edward Carson grumbled that Redmond’s speech was “calculated to humbug and deceive”.

Redmond’s objective was to get the Home Rule Bill on the statute book. His speech ensured it happened a little over a month later although operation of the Act was suspended for the duration of the war.

The Conservatives and unionists were furious. Their leader Andrew Bonar Law, after delivering a savage attack on Asquith, staged an unprecedented protest and led his party out of the Commons rather than witness passage of the Bill. “I have formally introduced the Bill by bringing it up from the Bar. The whole House rose and cheered wildly: for it was the end of the Home Rule controversy and a really historic moment,” noted Asquith.

In the belief he had achieved his life’s work, Redmond went a step further and in a speech at Woodenbridge, Co Wicklow, pledged the support of the Volunteers for the war effort. Belief that involvement in the war would result in a united Ireland with its own parliament was a strong motivating factor in Redmond’s call to arms, but it was not the only one.

Triumph turned to ashes Like many middle-class Irish nationalists, he was outraged at

atrocities perpetrated by the German army on the Catholic people of Belgium early in the war. Redmond believed that, by defending the right of a small nation like Belgium to exist against the power of Prussian totalitarianism, Irish soldiers would vindicate their own country’s right to freedom.

Redmond’s political life appeared to have culminated in triumph in September 1914, but it quickly turned to ashes as the war dragged on and Irish nationalism took a different turn in 1916. Shortly before he died in 1918 Redmond said: “Do not give your heart to Ireland, for if you do you will die of a broken heart.” Yet for all that, his achievement was to make Irish independence in some form irreversible and that the democracy prevailed over darker forces owes not a little to his legacy.