‘Once the locked door was opened everything became possible’ 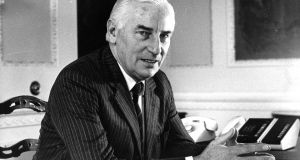 Peter Barry, then minister for foreign affairs, in his office at Iveagh House in 1985. Photograph: Jack McManus

Garret FitzGerald deserves more credit than anybody else for the Anglo-Irish Agreement, according to Peter Barry, who himself played an important role in its creation. “Garret’s influence on Mrs Thatcher was the thing that got it over the line. I am quite convinced of that,” he says.

Looking back with the perspective of 30 years, Barry has no doubts about the significance of the agreement. “It was like turning a key in the door. You can’t open the door without turning the key, but once you get the door open there are all sorts of goodies inside and that was the Anglo-Irish Agreement.”

He believes the agreement paved the way for all that followed, including the IRA ceasefires and the Belfast Agreement. Barry, the minister for foreign affairs in the 1982-87 Fine Gael-Labour coalition, played an important role in the creation of the agreement, but he insists that then-taoiseach Garret FitzGerald deserves more credit than anybody else for bringing it about.

Although he is from Cork, at the opposite end of the country to Northern Ireland, Barry took a keen interest in the difficulties faced by the nationalist community in the North from the time he was first elected to the Dáil in 1969.

“Long before I was in national politics I was disturbed by the plight of the nationalists in the north of Ireland. Soon after I was elected to the Dáil I went up to Derry and knocked on John Hume’s door unannounced and told him who I was.

“I told him that a lot of people down south who didn’t know anything about the North were making fiery speeches, but I wanted to meet people who were affected by it. “So he took me around Derry and then he gave me an introduction to people in Belfast. I heard first-hand what nationalists had to put up with. I described it later as the ‘nightmare of the nationalists’, and it was true. They had an awful time.”

Barry recalls that some people in Fine Gael treated him with suspicion because of his views, while some Northern nationalists were wary of him because he was a Fine Gael TD. At an early stage he was regarded as an enemy by the unionists.

When Garret FitzGerald formed his second administration at the end of 1982 he asked Barry, by then the deputy leader of the party, what cabinet post he would like.

“It took years to happen, many bumps along the way, a lot of false starts, some cul-de-sacs. Somebody said to me once, ‘Sure that is going to fail again so what are you going to do?’ And I said ‘start all over again.’ You could not leave that problem there. “I can’t say I enjoyed it but it was necessary to do it. I don’t say my role was significant but it was one more shoulder to a very rusty wheel. I remember Mrs Thatcher saying the north of Ireland was as British as Finchley. Well, we proved that it wasn’t.”Barry says his own part in the creation of the agreement was a modest one compared to that played by FitzGerald.

“He was the only Irishman I think that she trusted. She was quite fond of him, almost in a motherly way, some thought. But he was very important. Her willingness to listen to him was vital. And only for that we wouldn’t have got what was a major breakthrough at the time. She related to Garret; she trusted him and without that connection, that sparkle, the Anglo-Irish Agreement would not have been signed.

“The rest of us did a lot of work. We all filled in the blanks insofar as we could but Garret’s influence on Mrs Thatcher was the thing that got it over the line. I am quite convinced of that.”

He recalls that on the day of the signing of the agreement at Hillsborough Castle the Irish delegation assembled in one room and the British in another. They all came together and it was all very business-like. “Garret and Mrs Thatcher had notes prepared about what they were going to say at the press conference and it all went off without a hitch.”

He thinks Charles Haughey’s rejection of the agreement on the day it was signed was politically very stupid. “He even sent Brian Lenihan senior over to America to tell the Irish American leaders not to accept it but to give them their due Ted Kennedy, Tip O’Neill and Daniel Moynihan were appalled and gave us great support.”

After the agreement was signed Barry became the first Irish minister on the British Irish Intergovernmental Conference, the key institution established under its terms. The British representative was secretary of state for Northern Ireland Tom King.

The first meeting of the conference at Stormont was held less than a month after the agreement. Barry could not help relishing the fact that a Catholic nationalist from Cork was sitting down in the cabinet room where Craig and Brookeborough had run a Protestant state for a Protestant people.

“I knew the loyalists would be very upset with the minister from Dublin in Stormont, but I was entitled to be there, and it was important to be seen to be there.”

While there were often fraught relations between the Irish and British sides the meetings of the Intergovernmental Conference and the establishment of the Secretariat at Maryfield in Belfast changed Anglo-Irish relations for good.

“The Good Friday agreement was a great agreement too, but it followed on from our agreement. As I said, once the locked door was opened everything became possible.”