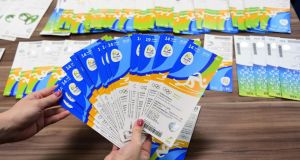 Tickets for the Rio 2016 Olympic Games marked with the name of the Olympic Committee of Ireland. Photograph: AFP/Getty Images

The Government is to establish a three-month inquiry into the Olympics ticket touting controversy but it will not have the power to compel witnesses or demand documents.

Minister for Sport Shane Ross confirmed a retired judge will lead the non-statutory investigation and will be asked to report back within 12 weeks. The terms of reference will be decided next week and the name of the judge announced.

“It will be limited in that it will not prejudice trials or anything that is happening there [in Brazil]. It will be deliberately limited in that way but we do not think that will limit us in finding out the facts,” he told a press conference in Dublin.

The controversy has overshadowed Ireland’s participation in the Olympics since a Dublin man working for UK company THG Sports was arrested in Rio on August 5th and tickets seized, many of them coming from the Olympic Council of Ireland (OCI) allocation.

Pat Hickey, the long-serving OCI president who is also a member of the executive of the International Olympic Committee (IOC), was arrested in his hotel room last Wednesday as part of the police investigation. He has stood down temporarily as OCI president and also from his other Olympic roles.

Mr Hickey faces spending the weekend in a Rio de Janeiro remand prison after his bid to be released from custody was rejected by a Brazilian judge.

Rio’s penitentiary administration confirmed Mr Hickey has been transferred to the José Frederico Marques public jail, known as Bangú 10, following his release from hospital on Thursday. He was taken to hospital after complaining of feeling unwell shortly after he was arrested.

Before his transfer to Bangú 10, Mr Hickey was taken to a police building in central Rio where he gave a statement to investigators. Police spoke to him at the Carlos Éboli Criminal Institute, where his mobile phones and computers are undergoing forensic examination by technicians.

He was accompanied by his legal team who had sought on Thursday to secure his release from detention by applying to a Rio judge for habeas corpus. However, the request was denied.

Mr Hickey could have to wait in jail for up to 10 days for a preliminary investigation into the accusations against him to be concluded. By then a public prosecutor must decide whether to formally charge him. At that point, Mr Hickey’s team could ask the judge for him to be freed until the case is resolved.

The OCI board said yesterday it had no further comment to make on the charges against Mr Hickey, who it said was receiving his own legal advice and was entitled to natural justice and due process. Independent legal advisers Arthur Cox had been appointed to advise the OCI board, it added.

The OCI, Pro10 – the OCI’s authorised ticket reseller for the Rio Games – and THG Sports all said they would co-operate with the Government’s inquiry.

The OCI said it would also commission its own independent inquiry into the ticketing arrangements for Rio. The internal inquiry it had earlier announced has been discontinued.

Mr Ross said the Government did not think compellability would be essential at this stage of the proposed investigation because a large number of the interested parties had agreed to co-operate with any inquiry it set up.

The OCI board is to meet this weekend to discuss events. It said it regretted recent events in Brazil had overshadowed the many great performances of Team Ireland at the Games.