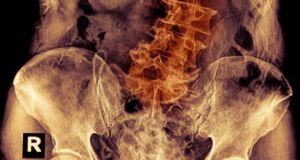 Our Lady’s Children’s Hospital in Crumlin is the largest provider of surgery for scoliosis or curvature of the spine. File photograph: AP

Minister of State for Health Marcella Corcoran-Kennedy has described as unacceptable the waiting lists for children who need surgery for scoliosis.

Ms Corcoran-Kennedy said the Department of Health was working closely with the HSE to address pressures on the service particularly in Our Lady’s Children’s Hospital in Crumlin, the largest provider of surgery for scoliosis or curvature of the spine.

She said Minister for Health Simon Harris had provided an additional €2 million funding before the end of the year.

Ms Corcoran-Kennedy said the construction of a new orthopaedic theatre in Crumlin had been completed. “This new facility will provide for additional scoliosis activity in 2017 but is dependent on the recruitment of additional theatre nurses.”

The hospital was successfully recruiting nursing staff but “balancing this with attrition rates, maternity and sick leave continues to present a challenge”.

A consultant is due to start at the hospital in July 2017 and this appointment is expected to help address the hospital’s capacity deficit in the long-term, she said.

Fianna Fáil health spokesman Billy Kelleher who raised the issue said July 2017 was a long way into the future for a five-year-old child who needed surgery today.

Pointing out that there are 208 children on the waiting list, Mr Kelleher said “the problem is that as I speak and the Minister listens children’s lungs and hearts are being slowly crushed while they wait.

“Some children can no longer retain their food because their stomach is being squeezed,” he said. This was happening to the five children whose parents he had discussed the issue with.

The Fianna Fáil spokesman raised the issue after meeting the Scoliosis Advocacy Network, who campaigned on behalf of their children and other children.

He highlighted a number of cases including that of 10-year-old Mary who was diagnosed with a 40 degree spinal curve but she had to wait 11 months before seeing a consultant, despite her mother phoning daily to secure the appointment and had to wait 17 months for surgery.

During that 11 months the curve on her spine deteriorated to 90 degrees and when she finally had surgery she had to have ribs removed because of the deterioration in her condition to over 100 degrees.

She is now back on a waiting list to for surgery to correct a failed fusion.

Mr Kelleher said he was not holding anybody personally responsible. “Nobody has a monopoly on humanity and we all want to help. However, the Minister must urgently revisit this issue,” he said.

Ms Corcoran-Kennedy acknowledged Mr Kelleher was not being political or over-dramatic on the issue. She reiterated that the recruitment of nurses was proving challenging.

“Every effort is being made to schedule patients for their surgeries,” she said.