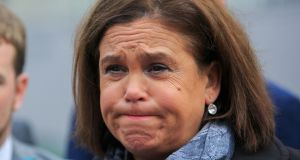 Sinn Féin President Mary Lou McDonald said the Taoiseach claimed at his party’s ardfheis he would deliver five years of tax cuts but he never said that tens of thousands of low paid workers would lose their entitlement to flat rate expenses. Photograph: Gareth Chaney Collins

Taoiseach Leo Varadkar accused Mary Lou McDonald of “hobnobbing with the super-rich” in New York on Armistice day. He was responding in the Dáil to the Sinn Féin leader who had accused the Government of favouring the superrich while cutting flat rate expenses worth €100 a year for low paid workers.

Ms McDonald said the Taoiseach claimed at his party’s ardfheis he would deliver five years of tax cuts but he never said that tens of thousands of low paid workers would lose their entitlement to flat rate expenses, worth an average of €100 a year from January 1st next year.

She said the group affected included “people like panel beaters, kitchen porters, nurses and members of the Defence Forces”. She said “shop assistants, the group worst affected, some 75,822 will lose €120 a year and that’s a net saving to the exchequer of €9 million a year”.

She said “ordinary workers fall to the bottom of the pile” of the Government’s priorities compared to the super wealthy.

She also said there were nearly 500 people with wealth of €50 million and in 2015 that cohort “claimed €93 million in tax credits, a great multiple of that claimed by low paid workers”.

She added that €45 million of that was for expenses such as furniture. Ending breaks for banks would deliver €175 million and ending tax breaks for multinationals for onshore intangible assets would raise €750 million.

Mr Varadkar said it would have no impact on people’s incomes next year and would not come into effect until January 2020 “if at all”.

Minister for Finance Paschal Donohoe later confirmed in the Dáil that the Revenue Commissioners will carry out a review of tax relief on expenses next year but there will be no changes until January 2020.

Some 80,000 workers were expected to lose the tax relief on flat rate, unvouched expenses and a majority of those workers, over 75,000 retail employees would lose an average of €120 a year, from January 1st next year.

However during debate on the Finance Bill Mr Donohoe said “expenses that are wholly, exclusively and necessarily included for the purposes of work will continue to be claimable under the Tax Consolidation Act and that is not changing”.

He said however that “the matter will be reviewed”. Revenue had told him that there would be no changes on how they implement this policy until January 2020, he said.

He said he read that on 11th November when all party leaders remembered the war dead, which was particularly significant “for the Protestant and unionist communities” and “when we show respect for the Constitution by attending his [the President’s] inauguration, you were in New York hobnobbing with the super rich at a $400 a plate lunch, for your super rich supporters”.

Ms McDonald said that on November 14th she attended a remembrance day service at Sligo Grammar, an event all leaders were invited to, and paid her respects there.

She said the Taoiseach’s response amplified his position on tax relief for corporates but a very different view was taken for retail workers.

“Can you for once empathise and put yourself in the place of retail workers?”

“We see Sinn Féin trying to claim that they can put themselves in the shop workers’ shoes, when we know for years and years and years they told porkies about their own salaries, that they were living on the average industrial wage.”

He said the Government was clamping down on tax breaks and tax evasion left, right and centre, including the exit tax and closing off the double Irish.

Mark Guilfoyle, president of Sinn Féin’s US fundraising arm, declined to comment on the Taoiseach’s remarks about the Friends of Sinn Féin annual dinner in New York but said that it was held on November 8th - three days before Armistice Day, the day Mr Varadkar said it took place.

He would not be drawn on the Taoiseach’s characterisation of the party’s guests as being “super-rich.” He would only say that it was “another successful event” hosted by the organisation.

Declining to reveal the sum raised at the event, Mr Guilfoyle, a Cincinnati-based lawyer, said the group would publish financial details around the event in its biannual filings to the US Department of Justice as a foreign agent of Sinn Féin as required under US law.

That filing, which will be made in mid-2019, will list the names of donors who attended the annual dinner, Sinn Féin’s most lucrative fundraiser every year in the US, and the amounts raised as well as the group’s expenditure in the six-month reporting period from November to April 2019.

“We do value transparency, and the Justice Department filing is the best vehicle for delivering on transparency,” Mr Guilfoyle told The Irish Times.

The group will publish a filing in the coming weeks covering the reporting period between May and October 2018.