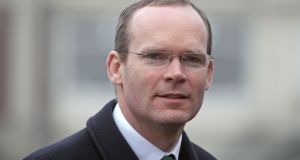 Simon Coveney: “There is no country in the EU even close to Ireland in terms of the level of priority and preparedness that we already have in place for the negotiations that are on the way”

Ireland will not allow itself to be forced to take sides in UK-EU Brexit negotiations, Minister for Housing Simon Coveney has said. “We cannot afford to do either.’’

He said Ireland needed to remain close in terms of its political and trade relationships with the UK and it would do so.

“We also need to be a proactive and strong and positive member of the EU in the context of trying to manage the fallout from Brexit.’’

Mr Coveney said the Government would prioritise looking after Irish interests, whether they be Irish citizens in the UK, Ireland or further afield. He said “multiple’’ actions had been taken to date in order to do that.

“There is no country in the EU even close to Ireland in terms of the level of priority and preparedness that we already have in place for the negotiations that are on the way,’’ said Mr Coveney.

The Minister was replying at Opposition Leaders’ Questions to Fianna Fáil’s Niall Collins, who said the uncertainty about Brexit negotiations was affecting consumer confidence, sentiment and investment across the EU, particularly in the UK and in Ireland.

He said Ireland’s future relationship with the UK would depend on the UK’s priorities during negotiations and the extent the European Commission and member states could and would accommodate Ireland’s specific needs.

Mr Collins said the UK’s importance to Ireland, socially and economically, was obvious. Last year our exports to Britain amounted to €15.6 billion, of which beef was worth €1.9 billion. Other exports included medical and pharmaceutical products and food-based products.

“The agrifood sector across this island is exceptionally worried and is projecting job losses in the first and second quarters of next year,’’ said Mr Collins. “We are told that those jobs will be labour intensive and rurally based in the main.’’

He said industry could not be left feeling isolated while 18 months of negotiations took place.