State ‘dallying’ on funding for in danger disability schemes 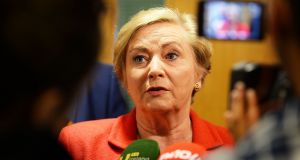 Tánaiste and Minister for Equality Frances Fitzgerald pointed out that the Government had committed €31 million to helping those with disabilities. File photograph: Cyril Byrne/The Irish Times

Tánaiste Frances Fitzgerald has rejected Sinn Féin claims the Government is “batting back and forth” on funding for a work scheme for people with disabilities when it could make an immediate decision to provide “stop gap” money and prevent its closure.

Sinn Féin leader Gerry Adams said 119 people were availing of a programme in Co Louth which helped them to plot out their own future, and most were now in further education or working.

The work peer scheme forged vital links in the community and was one of 14 disability activation schemes funded by the EU and the Government but their funding was withdrawn.

The Co Louth scheme remained open because of funding from Ulster Bank but this was now coming to an end and the scheme would close very soon without intervention.

He said “it makes no sense that any group should have to shut its doors because of a failure of the Government”. The funding was €350,000 and it should be urgently provided to give vital support, he said.

The Louth TD highlighted the commitment in the programme for government to provide equality of opportunity for those with disabilities. But he said no funding had been ring-fenced for this and about 600,000 people in Ireland lived with disability.

Ms Fitzgerald insisted however the Government and Minister of State for Disabilities Finian McGrath intended to “get a solution so that people will not be left without this project”.

Rejecting claims that the issue was being “batted back and forth” rather than decided on, Ms Fitzgerald pointed out that the Government had committed €31 million to helping those with disabilities.

She said 14 disability activation projects were funded until April 2015 and private funding had been found since then but was coming to an end.

She said the implementation group for employment strategy was working for a solution on how mainstream funding could be provided for the schemes.

Ms Fitzgerald added that there was longer-term work to be done about developing more mainstream work for people with disabilities.