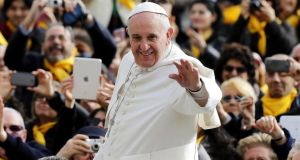 
A formal request to Pope Francis to visit Ireland moved a step closer after the Seanad unanimously agreed a motion inviting him to address the Upper House.

Independent Senator David Norris, who proposed the motion, described the pontiff as a man with a “prophetic, compelling and comprehensive vision”.

Mr Norris said he did not believe the pope “is going to campaign for gay marriage or women priests. However, he has changed the entire climate of debate within the Catholic Church, allowing for genuine dialogue.”

He said “Christendom is in a perilous state and the pontiff “is a man who has spotted the iceberg and is trying to turn Titanic around”.

By addressing the Seanad and coming to Ireland, “he would give us all a lift at this time in our history. He brings hope, joy and community”.


Irish links
Mr Norris also referred to Pope Francis’s links with Ireland and said he was partially educated at Milltown Park in Dublin. The motion, already accepted by the committee on procedure and privileges, was seconded by Independent Senator Seán Barrett, who said “this visit would enhance Irish society immensely”.

Fine Gael Senator Paul Coghlan said it was very important for Ireland that the pope was from Argentina, which he said was the “largest non-English speaking segment of the Irish diaspora and the fifth largest overall”.

He added that “the pope is of Italian parents and I believe he has a wonderful respect for Ireland . . .”

Fianna Fáil’s Lábhras Ó Murchú said when the invitation was first mentioned, “I had a certain doubt in my mind as to how it might be perceived or even be ridiculed, like The Skibbereen Eagle and the Tsar”. But said the more he thought about it, “the more I realised any worthwhile development has to start from a premise of openness”.

Labour’s Aideen Hayden said “one does not turn an institution like the Catholic Church around in 24 hours, but the pope’s self-awareness on these issues is clear.

Independent Senator Feargal Quinn, who said he had received a papal knighthood 20 years ago, said inviting Pope Francis to visit Ireland “would be an important step on the road to exploring how we can work together on the issues that confront the world”.

Fianna Fáil Senator Jim Walshe said he would prefer if the pope’s visit was a pastoral rather than an official visit. “Most of our human rights have emanated from our Christian traditions over the centuries.”