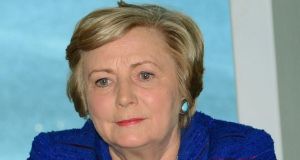 Minister for Justice Frances Fitzgerald was first elected as a TD in 1992 in the Dublin South East (now Dublin Bay South, but lost her seat in 2002. She then ran in the 2007 election in Dublin Mid-West but did not win a seat. She won a seat in the Seanad and then a seat in Dublin Mid West in 2011. She was appointed to Cabinet as the first full Minister for Children. She became Minister for Justice in 2014 following the resignation of her Fine Gael party colleague Alan Shatter.